What did the federal government do last year?

The executive, legislative, and judicial branches of the federal government act together to shape policy and its implementation. To give a glimpse into what federal government does, this section summarizes a subset of that work completed in 2020 by the executive and legislative branches. Specifically, it shows bills that became public law, executive orders and presidential memoranda, and rulemaking by executive agencies classified as significant by the Office of Information and Regulatory Affairs.

The CARES Act, a $2 trillion coronavirus relief package passed in March 2020, had 369 House cosponsors — more than any other bill. The only other bills to receive more than 300 sponsors were ceremonial or historical, like legislation to mint honorary coins for Purple Heart recipients and expand educational programming at the US Holocaust Memorial Museum.

That reflects all executive orders, plus presidential memoranda — another, similar form of official directive often discussed interchangeably — that the administration chose to publish in the Federal Register. It excludes one order that President Trump issued, revoked, and replaced in the same month.

This does not include 22 rules that were corrections or amendments to, or notifications about, other significant rules passed in the same year. It does count one rule finalizing certain firearms and munition deregulation, though it was later blocked by court order.

What did these 333 federal government actions do?

There were 24 actions about health.

Other actions affected public health services, like a law designating 988 as the universal telephone number of a national suicide prevention hotline.

There were 33 actions about the economy and jobs.

Among them was an executive order requesting broad business deregulation in response to the economic impact of COVID-19, as well as a bill ratifying the United States-Mexico-Canada Agreement to replace the North American Free Trade Agreement.

Other orders affected business support programs like the Paycheck Protection Program (PPP), employment and occupational safety, and monetary policy like stabilizing the exchange rate of the dollar.

There were 18 actions about standard of living.

Six affected civil rights and accessibility, such as a bill establishing a commission to study the conditions facing Black men and boys, as well as an executive order requesting that social media moderation permitted under section 230(c) of the Communications Decency Act not impair free speech.

There was also an executive order extending assistance to renters and requesting the eviction moratorium later implemented by the Centers for Disease Control and Prevention; another order, categorized under other aid, suspended student loan payments after the expiration of the CARES Act.

There was one action on population.

It was a presidential memorandum requesting that unauthorized immigrants not be counted in the 2020 census for reapportioning representation in Congress. Lower courts found the action unlawful or unconstitutional; the Supreme Court chose not to rule on the issue.

(While not counted in the 333 federal actions listed here, there was also Secretary of Commerce Wilbur Ross’s decision to end the census count on September 30, 2020, a month before planned. After lower courts required the Census Bureau to continue counting until October 31, the Supreme Court intervened to allow it to end early.)

There were 16 actions on the budget.

That included the five stimulus bills passed in Congress, which began with $8.3 billion in emergency funding granted in March, followed by expanded sick leave and unemployment benefits in the Families First Coronavirus Response Act and the CARES Act later that month; a second round of PPP funding for small businesses in April; and the $900 billion package signed into law in December. There were also extensions for expiring programs and three continuing resolutions that prevented a government shutdown until Congress passed the budget for the new fiscal year.

Among the actions on taxes and revenue was the presidential memorandum to defer payroll tax obligations for certain employees through the last four months of the year.

There were two actions on education.

One was a bill addressing school funding. The other was an executive order promoting positive representations of American history over critical ones, especially regarding slavery and the civil rights movement.

That said, when including actions not primarily aimed at education reform, a total of five out of all 333 federal actions affected students — such as the criminalization of unauthorized use of student loan information and the suspension of student loan payments.

There were 20 actions on crime and justice.

Ten were on prisons and sentencing, like a bill that prohibited voter system interference under existing computer fraud and abuse legislation. Six fell under crime prevention, including two bills to minimize violent crime and trafficking on Native American reservations by increasing coordination and mandating data collection on missing persons by gender.

Four affected policing, with bills training police to detect elder abuse, expanding death and disability benefits for officers, and establishing data collection on officer suicides. Amidst protests for racial justice in June, President Trump also signed one executive order requesting the prohibition of chokeholds, the creation of a database on excessive use of force and its consequences, and the usage of social service workers as primary responders for those with mental illnesses.

There were 46 actions on land, energy, and the environment.

Eleven were on energy, including a presidential memorandum encouraging support of fracking and others granting permits for oil and natural gas pipelines operating on federal lands. Eight actions affected pollution, like a rule reducing fuel emissions standards.

Four were bills about Native American reservations, adding 11,760 acres to the reservation of the Leech Lake Band of Ojibwe, officially nullifying an unenforced 1865 treaty that restricted the rights of tribal members in Oregon to leave their reservation, and creating a grant program to support entrepreneurship in Native American communities.

There were nine actions on infrastructure.

Among them were executive orders promoting infrastructure investment in low-income communities and a classical style in federal architecture, memoranda and rules relating to railroads, and a bill about broadband service availability.

There were six actions on immigration.

Four were about arrivals and removals, reducing the cap on refugee admissions for 2021 and imposing more stringent enforcement of H-1B work visa regulations.

(Though not included in the 333 federal actions discussed here, there were also two presidential proclamations — yet another kind of presidential directive — suspending immigration on certain visas.)

There were 82 actions on defense.

Of the 24 about foreign affairs, nine were related to China. These included a bill passing sanctions for human rights abuses against the Uyghur minority, as well as two executive orders about TikTok and one about WeChat.

There were 24 actions managing defense personnel, 21 of which were memoranda from President Trump authorizing and funding the use of the National Guard to combat COVID-19.

There were 76 other kinds of actions.

The majority were ceremonial, like naming post offices in honor of various people.  Another 22 concerned matters of general governance, including an executive order making it easier to hire and fire certain career employees. There was also a bill aimed at improving death data to cut down on improper Social Security payments to the deceased, as well as an executive order prohibiting certain types of racial awareness training for federal employees.

To learn more, look at the full list of actions categorized in this section, including descriptions, dates, source links, and the names and political parties of bill sponsors.

Continue exploring the State of the Union (2021) 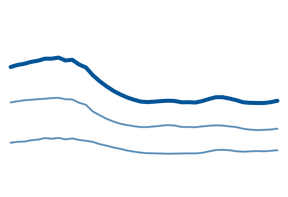 What is the state of the military, and how are US veterans faring?