What are some of the actions the federal government took in 2019 in these issue areas?

Each year, the executive, legislative, and judicial branches of the federal government take actions that shape policy and how it is implemented. Federal government actions include Congressional legislation, dozens of notices and rule changes made daily by executive agencies, Presidential executive orders, and judicial decisions at all levels of courts. For a glimpse of some of the actions taken in 2019, this final section organizes three types of government actions into the eleven topics covered by the State of the Union in Numbers. We include bills that became public law, executive orders, and rules made by executive agencies that impact the economy by $100 million or make a material change to legal, budgetary, or policy precedent (for more information on significant regulatory actions, see the Office of Information and Regulatory Affairs). We chose to focus on creation and enforcement of law rather than judicial review, which is accomplished by a multitude of federal courts.

There were 216 federal actions that fit this definition in 2019. These are some highlights.

There was one population action:

an executive order asking the 2020 Census to collect information on citizenship status. The Supreme Court later blocked this action.

There were 10 budget actions,

including passing the Consolidated Appropriations Act into law, setting the budget for fiscal year 2019.

There were 15 economy actions,

including a law passed by Congress to protect some small businesses in certain bankruptcy proceedings; an executive order strengthening preferences for American-made goods in federal procurement; and a rule reducing the regulatory burden in setting safety and health standards for workers.

There were five actions related to the standard of living,

There were six education actions,

including an executive order on free speech and accountability on college campuses; and a law passed by Congress to recognize the achievements of school employees.

There were 17 health actions,

including a law passed by Congress advancing Autism research and services; an executive order announcing new healthcare price transparency requirements to enable consumers to make more informed decisions in selecting providers; and a rule changing the hospital discharge process for some people in Medicare and Medicaid programs.

There were 14 crime actions,

including a law passed by Congress expanding support for police officer family and mental health services; an executive order addressing transnational criminal organizations; and a rule changing the approval process for explosives licenses.

There were 31 defense actions,

including a law passed by Congress expanding protections for veterans in bankruptcy; an executive order imposing sanctions on Iran; and a rule requiring some defense contractors to report counterfeit or potentially counterfeit parts purchased.

There were 11 immigration actions,

including a law passed by Congress providing humanitarian assistance and security at the Southern border; an executive order enhancing state and local government involvement in refugee resettlement; and a rule changing the treatment of juveniles and families of immigrants in government custody.

There were nine infrastructure actions,

including a law passed by Congress to restore Harmony Way Bridge between Indiana and Illinois; an executive order strengthening preferences for American-made building materials in infrastructure projects; and a rule prohibiting the transport of lithium ion cells and batteries as cargo on passenger aircraft.

There were 28 actions for energy and the environment,

including a law passed by Congress to preserve certain public lands and animal habitats from development; an executive order promoting energy infrastructure and economic growth; and a rule rolling back certain fuel economy standards for cars and rescinding California's authority to set its own emission standards for certain vehicles.

There were 65 other actions that did not fit in these categories.

Some of these actions were related to agriculture, such as a law passed to provide economic relief to farmers; some were ceremonial declarations like the naming of 19 post offices; some related to non-military foreign affairs, such as a law imposing sanctions on officials responsible for human rights abuses in Hong Kong. There were also actions related to general governmental operations, such as executive orders evaluating the utility of federal advisory committees.

Continue exploring the State of the Union (2020) 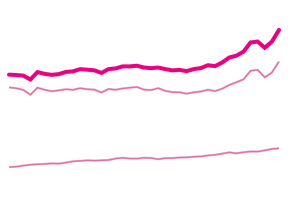 What are our major sources of energy? What environmental challenges do we face?​