Ten candidates for the Democratic presidential nomination met on an Atlanta stage yesterday to make their case. And as we at USAFacts like to say, debates should be grounded in facts. Here are reports related to five key topics to shed more light on the latest debate.

Ten candidates for the Democratic presidential nomination met on an Atlanta stage yesterday to make their case. And as we at USAFacts like to say, debates should be grounded in facts. Here are reports related to five key topics to shed more light on the latest debate.

Candidates spoke about wealth in the US, with Senator Elizabeth Warren talking specifically about her plan for taxing the most affluent Americans. With that in mind, we have new data analysis on wealth in the United States post-recession. Did you know that the nation’s household wealth grew 58% from 2009 to 2019? That growth has not been consistent across all income brackets, however. Read the report to see more, including wealth distribution by income groups.

Sens. Amy Klobuchar and Kamala Harris discussed their plans for paid family leave (for three months and six months, respectively). Entrepreneur Andrew Yang said that the only countries without paid family leave are Papua New Guinea and the United States. While we don’t have the data on Papua New Guinea, but we do have a report on government-funded child care support. Our report also shows that 10% of people ages 25 to 54 say they work fewer hours than they’d like due to their need for child care.

Realizing a larger version of Medicare was again a big topic early in the night. While the candidates debate how to fund it, we have the data on current Medicare costs. For example: it’s presently more expensive than private insurance, but Medicare costs have remained flat for the last decade. Meanwhile, we also have numbers on health insurance by each state. The number of uninsured Americans increased by 1.8 million from 2017 to 2018, the first time since the implementation of the Affordable Care Act. 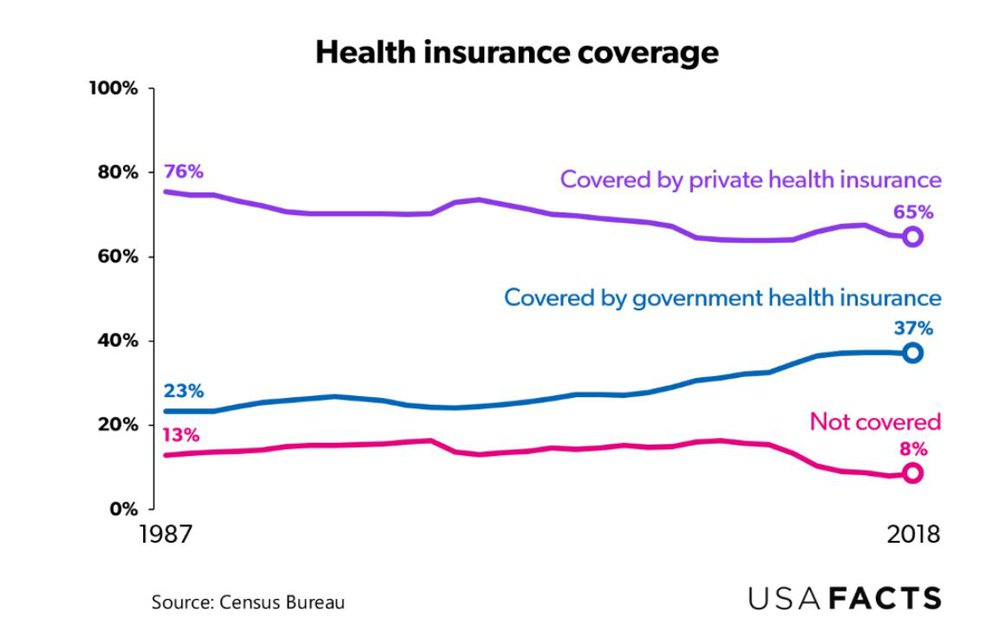 With Senator Bernie Sanders’s talk about fossil fuels at the debate, it’s important to know how the nation is doing in eliminating emissions. We have the data on power production by state — all broken down into specific categories like solar, geothermal, natural gas, coal, and much more. And due to an increase in travel, transportation is now a more substantial source of greenhouse gas emissions than electricity.

Senator Warren noted that housing is how Americans build generational wealth. Businessman Tom Steyer elaborated on a need for more housing in California. Our data shows that between 2010 and 2017, California had the fewest new building permits for each new resident. Where are homes being built in America and what are the vacancy rates? Take a look at the state of homeownership, construction, and homelessness since 2010.

How does the government support child care?