Disability in the US, 30 years after the Americans with Disabilities Act

According to US Census Bureau estimates, there were just over 40 million Americans with a disability in the US in 2018. 7.6 million were employed.

On July 26, 1990, President George H.W. Bush signed the Americans With Disabilities Act (ADA) into law, which extended civil rights protections to people with disabilities and looked to prevent discrimination against the disabled in the workplace and in public spaces.

Thirty years later, the most recent census data shows that there were just over 40 million Americans with a disability in the US, or 13% of the population, not including those who are in institutions like prison, or long-term care facilities.

The ADA defines someone as having a disability if they:

The 2018 ACS provides context about who the ADA protects. Additional data from the Bureau of Labor Statistics shows the role of Americans with disabilities in the workforce.

The types of disabilities

The ADA doesn’t specifically name every impairment it covers. But Census data groups impairments into categories, providing a way to understand who is living with disabilities..

Fifteen million Americans — 5% of the population — live with cognitive or mental impairments.

The demographics of Americans with disabilities

The share of Americans experiencing a disability rises with age.

In 2018, 6% of Americans between the ages of 18 and 34 had a physical or mental impairment. Nearly half of all Americans aged 75 and above — 48% of all those surveyed — lived from a disability.

Share of age group with at least one disability

Disabilities vary by race and ethnicity.

In 2018, 14% of white, non-Hispanic people, 14% of Black people, and 9% of Hispanic people experienced some kind of physical or mental disability.

Among racial groups, American Indians and Alaska Natives had the highest rate of disability, with 17% of the population affected by a disability.

Share of racial or ethnic group with at least one disability

Income and employment of Americans with disabilities

In 2019, the labor force participation rate for those in the age group without disabilities was 77.3% with a 3.6% unemployment rate.

Americans with and without disabilities have similar rates of graduating from high school (34% and 25% respectively) and completing some college or associate’s degree training (28% and 29%).

Understanding the demographics of disabilities can help inform businesses, employers, and communities how to adapt to support a group that includes one in eight Americans. 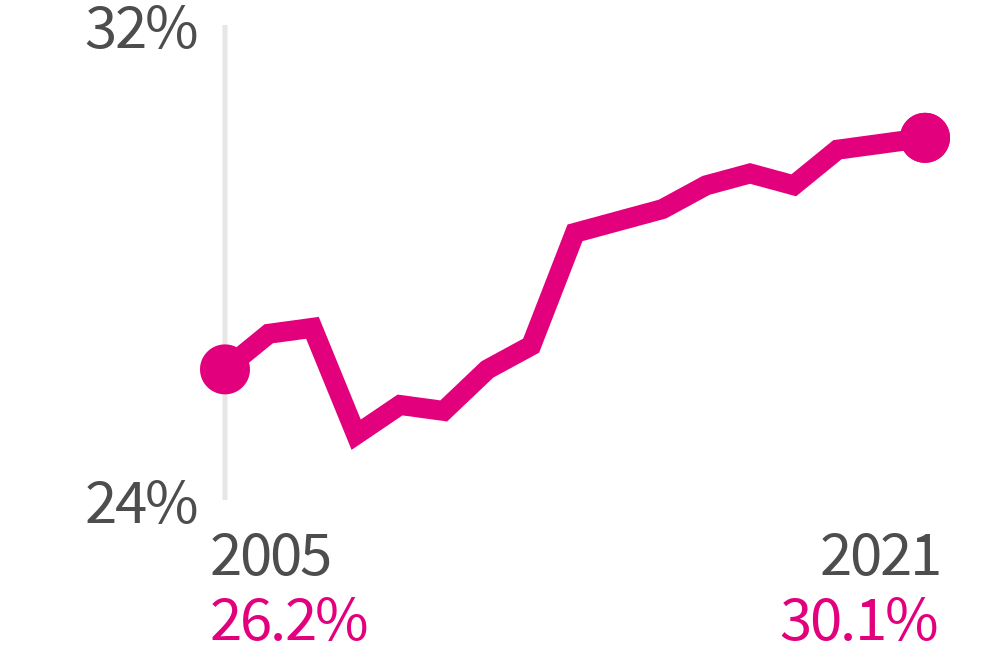 Veterans with any disability