The co-founder of the NAACP displayed a series of hand-drawn charts and maps at the 1900 Paris Exposition. Map showing distribution of Black Americans created by W.E.B. Du Bois and team for the 1900 Paris Exposition. (Library of Congress)

W.E.B. Du Bois was a pioneer in several ways, including being the first Black person to earn a doctorate from Harvard and founding what continues to be a prominent civil rights organization, the National Association for the Advancement of Colored People or NAACP.

He was also a pioneer in the field of data visualization.

For the 1900 Paris Exposition (sometimes also called a world’s fair), Du Bois was the lead organizer of The Exhibit of American Negroes, which examined the status of Black Americans less than four decades after the end of slavery. In addition to displaying photographs related to Black lives, the exhibit also featured two series of data visualizations researched and designed by Du Bois and his students at Atlanta University, which is now Clark Atlanta University. Government sources, including the US Census and the then-Bureau of Labor, figured prominently in the dozens of hand-drawn charts that are now housed at the Library of Congress.

The first series, “The Georgia Negro,” focused on the state with the highest population of Black people at the time. “This case is devoted to a series of charts, maps and other devices designed to illustrate the development of the American Negro in a single typical state in the United States,” Du Bois wrote in an accompaniment to the opening visualization of the exhibit: a map illustrating the African slave trade. Diagram of African slave trade routes created by W.E.B. Du Bois and team for the 1900 Paris Exposition. (Library of Congress) Bar chart comparing the age distribution of Black Americans and residents of France created by W.E.B. Du Bois and team for the 1900 Paris Exposition. (Library of Congress) 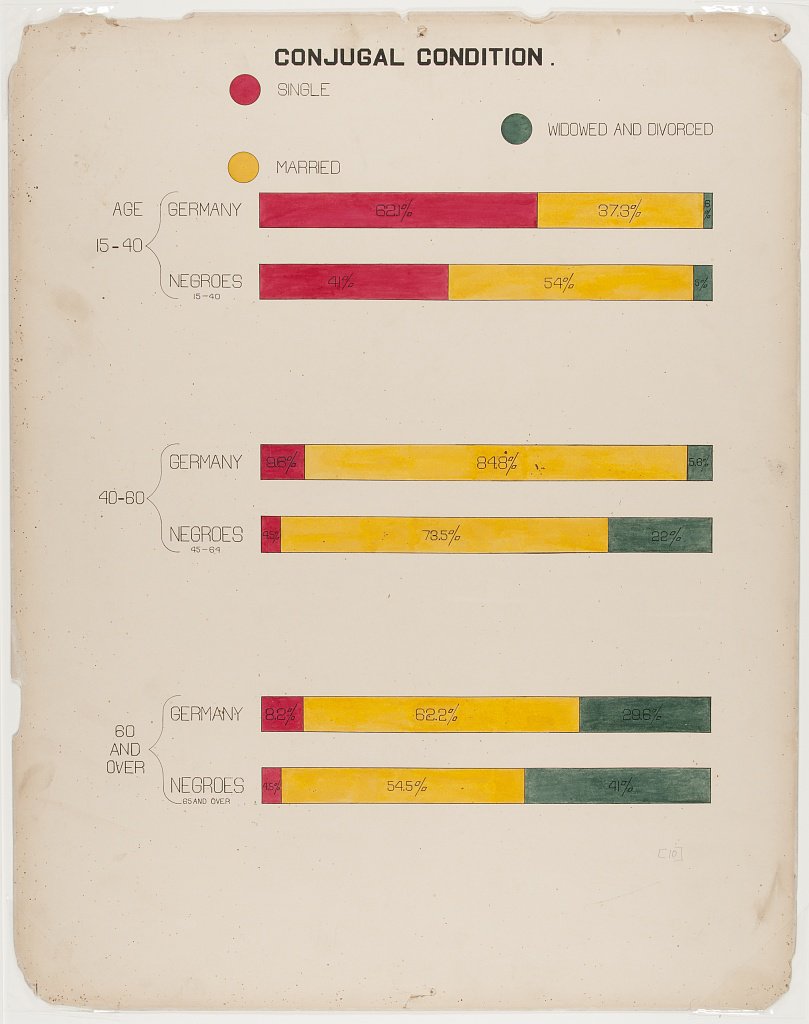 Bar chart comparing marital status of Black Americans and residents of Germany created by W.E.B. Du Bois and team for the 1900 Paris Exposition. (Library of Congress)

The series also delved into topics including education, wealth, and the occupations of Black Georgians. Bar chart of the occupations of Black Georgia residents created by W.E.B. Du Bois and team for the 1900 Paris Exposition. (Library of Congress)

The second set of visualizations, entitled “A series of statistical charts illustrating the condition of the descendants of former African slaves now in resident in the United States of America,” offered a wider view of Black Americans. In an essay about the exhibit, Du Bois wrote: “At a glance one can see the successive steps by which the 220,000 Negroes of 1750 had increased to 7,500,000 in 1890; their distribution throughout the different States; a comparison of the size of the Negro population with European countries bringing out the striking fact that there are nearly half as many Negroes in the United States as Spaniards in Spain.” Illustration comparing the population of Black people in the US with the total population of European countries created by W.E.B. Du Bois and team for the 1900 Paris Exposition. (Library of Congress)

While several of these charts featured population and demographic data, others focused on the economic status of Black Americans. One chart showed the share of Black landowners and tenants in Southern states.

Du Bois’ works were an early example of how data can provide context about issues including demographics. That practice continues to this day, as government data helps illuminate demographic imbalances in health, wealth, and homeownership.

All of Du Bois’ charts can be viewed on the Library of Congress website.