One million Americans have died of COVID-19

4.4 million households with children don’t have consistent access to computers for online learning during the pandemic

Millions of students have no internet while sheltering at home. See who is affected by home learning environments without technology access.

In late April 2020, the US Census Bureau, in partnership with five other statistical agencies, created a rapid response survey to assess the impact of the COVID-19 pandemic. The Household Pulse Survey measures a variety of issues that affect households, including internet and computer access for online learning.

USAFacts dug into the data to provide updated information on technology access for children going to school online. Insights are pulled from week 14 of the Household Pulse Survey based on data collected from September 2 through 14. Statistics are not directly comparable because the new Household Pulse Survey data is reported as number of “households with children,” while the older National Center for Education Statistics data is based on children ages 3-18. Without knowing the average number of children in different types of households, it’s difficult to know the percent of all children with computer and internet access.

Overall, 4.4 million households with students still lack consistent access to a computer and 3.7 million lack internet access. While more than half of households were provided computers from schools, a small fraction were supplied with devices to access the internet.

Schools have closed nationwide to prevent the spread of COVID-19, meaning a majority of the more than 56 million K-12 students in the US will attend school online in the spring. Some students will be able to make this transition easier than others. According to the most recent data from the National Center for Education Statistics (NCES), 14% of children ages 3-18 don't have internet access at home. More than 9 million schoolchildren will face difficultly completing assignments online.

Reasons for not having home internet vary. Most families surveyed by NCES reported that they simply don’t need it. These families may choose to setup home internet during this pandemic. However, 34% reported not having internet because they were unable to afford it, 4% because they did not have a home computer, and 4% because an internet connection was not available in their area. This means at least 42% of children without home internet will face barriers to connectivity.

In addition to home internet, the lack of a laptop or desktop computer on which to complete schoolwork is another barrier to full participation in remote learning. Among children ages 3-18, 17% live in households without a laptop or desktop computer. At least 11 million students don't have a computer for online learning at all, in addition to those that may need to share a single device with siblings. Lack of access to home internet or a computer increases for lower-income students. 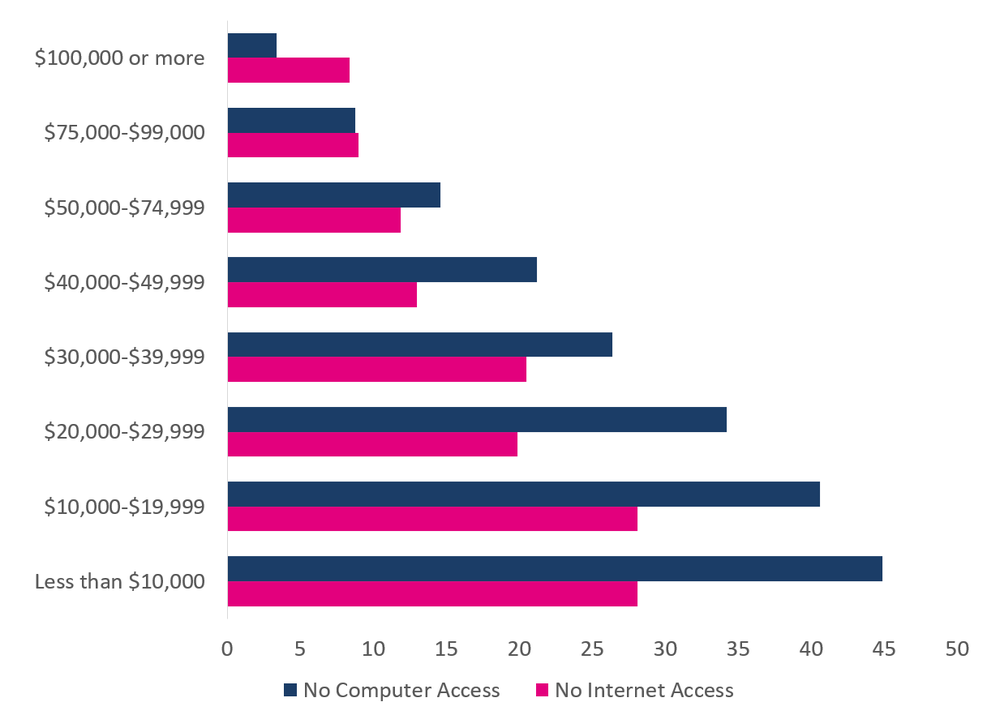 Access to computers and home internet varies by geography. While 14% of all households with school-aged children don’t have internet at home, the percent increases by four percentage points to 18% for households in rural areas. The rural/urban internet divide is an issue of concern for governments. The US Department of Agriculture has invested in rural broadband for decades and the federal government announced the American Broadband Initiative in 2019. 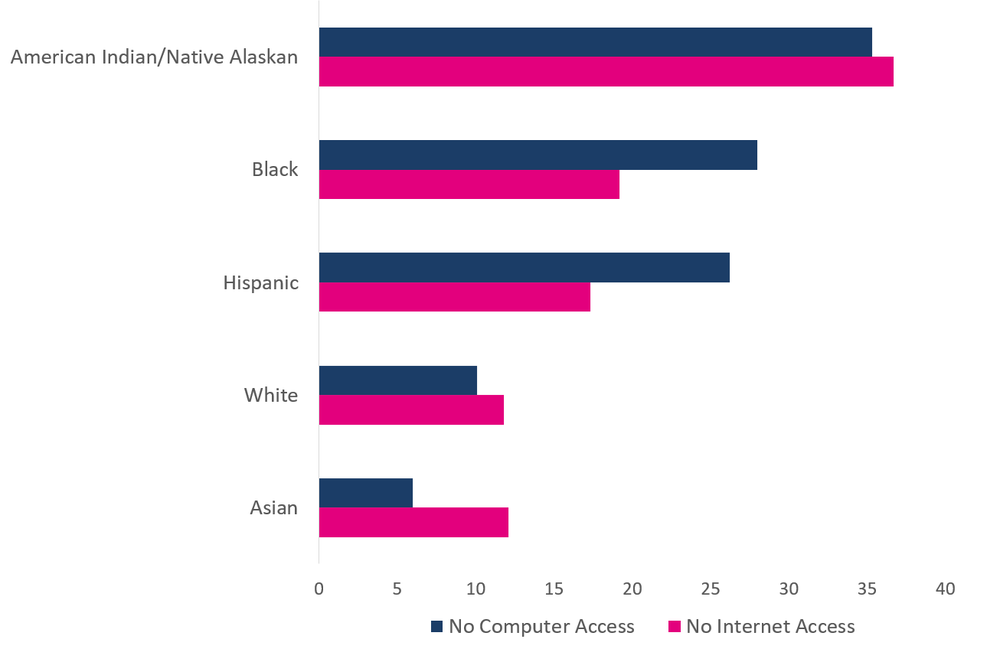 Technology availability isn’t the only barrier to remote learning. Some children may not have access to a quiet place to learn; remote learning will be particularly difficult for the 1.5 million homeless students in the US. At present, there are no statistics on where children are living during coronavirus shutdowns. However, news outlets reported some children are staying outside their parental home with grandparents or other caretakers who may have slow speeds or no internet altogether. Lastly, the Department of Education is helping schools address remote learning challenges for students with disabilities.

Policies to expand universal home internet access may receive renewed attention in response to coronavirus shelter in place orders. In the meantime, some school districts are getting creative to provide access to digital learning. South Bend, Indiana is deploying buses as wifi hotspots and New York City is distributing 300,000 Apple iPads to students. Responses vary based on a school district’s ability to provide resources.