Back to school: How states are approaching mask mandates and in-person learning

Seventeen states including Washington, DC are requiring indoor mask-wearing in K-12 schools for the fall semester

As many students return to in-person school for the first time in over a year, schools districts nationwide are taking different approaches to indoor masking requirements to prevent spreading COVID-19.

The Centers for Disease Control and Prevention (CDC) announced in early August updated recommendations for universal indoor masking in K-12 schools for all students, staff, teachers and visitors regardless of vaccination status. Some states responded to the announcement with mask mandates in schools. Others banned school districts from requiring K-12 students to wear masks indoors, leaving the decision up to parents.

Seven states have bans on school mask mandates. Arkansas Gov. Asa Hutchinson, who signed a law banning mask mandates earlier this year, is now working to revoke it after the Delta variant caused a rise in COVID-19 cases and deaths. In Arizona, some schools are going against a new state law and requiring students to wear masks for in-person learning.

The governors of Florida and Texas issued executive orders prohibiting school mask requirements. Districts challenged the bans in court. The Texas Supreme Court ruled the ban was valid, but state officials said in court it would no longer enforce it. In Florida, a judge blocked the governor's ban, allowing districts to require masks.

The Department of Education is investigating Iowa, Oklahoma, South Carolina, Tennessee, and Utah for prohibiting indoor masking in schools. The mask bans may violate protection for students with disabilities who are at high-risk of severe illness from COVID-19, according to a press release.

Seventeen states and Washington, DC issued mask mandates in all K-12 schools. Nevada is mandating indoor masking in schools located in counties with populations of 100,000 or more. The other 27 states gave local discretion to school districts, although many state governments highly recommend school districts follow the CDC’s guidelines. 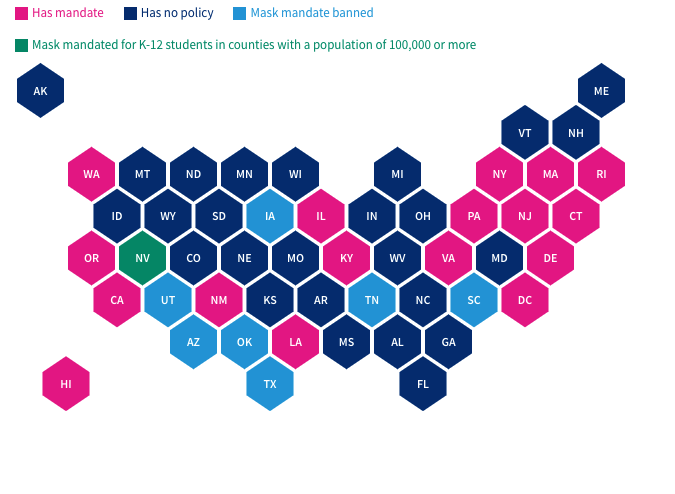 The Education Department expects all schools to return to full-time, in-person instruction this school year. States are asking districts to rely on recommendations from local health departments and from the CDC on mask-wearing, social distancing and other COVID-19 precautions. Colorado and Virginia have remote and hybrid learning options. Arkansas said 94% of local educational agencies will offer a full-time on-site option. At least 17 other states are offering remote learning for those who want it, according to the Office of Elementary and Secondary Education.

Some states are limiting virtual learning to students with medical exemptions. In Illinois, students who are ineligible for a COVID-19 vaccine and are under quarantine orders from the state health department can take classes virtually. New Jersey Gov. Phil Murphy banned remote-learning options but will allow students who’ve been exposed to COVID-19 to attend school virtually while in quarantine. In South Carolina, school districts will lose state funding if more than 5% of the district's student population opts to take classes virtually. There is no overarching federal plan to keep all public schools in-person full-time this school year. In most states, decisions on when to move learning to a virtual or hybrid model due to a COVID-19 outbreak are being left up to individual school districts.

The American Rescue Plan created a school emergency relief fund. State education agencies had to submit a safe school reopening plan and have it approved by the Education Department before getting access to the federal money. Forty-six states have submitted plans so far, and 33 were approved.

So far, the Department of Education has distributed $106.4 billion in relief funds to state education agencies.

$106.4 billion of the $122 billion school emergency relief fund has been awarded so far

How uneven educational outcomes begin, and persist, in the US