What does the government do to manage our environment?

There are 715 animal species listed as threatened or endangered, including 139 types of fish, 106 birds, and 78 mammals.

The federal government collected $7.6 billion in revenue from energy and mineral extraction on its lands and waters in FY 2020, a 37% decrease from 2010, adjusting for inflation.

There were 237 million visits to land managed by the National Park Service (including national parks, historical sites, and national monuments) in 2020, 28% fewer than in 2019.

Before the pandemic, park visitation per capita was still below its 1980s peak.

Visits to parks like the Grand Canyon and Yosemite dropped by half due to the pandemic and park closures.

The federal government spent $40.9 billion in 2020, or 0.6% of all federal expenditures, on the environment and natural resources (not including spending on renewable energy).

Most spending went to the Forest Service ($7 billion), transfers to state and local governments ($6.7 billion) and the National Oceanic and Atmospheric Administration ($6.1 billion).

State and local governments spent $62.1 billion on the environment and natural resources in 2018, $34.0 billion of which went to local parks and recreation services (net of fees collected).

Combining bills that became public law, executive orders and presidential memoranda, and significant rulemaking by executive agencies, there were 46 federal actions on land, energy, and the environment in 2020.

Eleven were on energy, including a presidential memorandum encouraging support of fracking and others granting permits for oil and natural gas pipelines on federal lands. Eight actions were on pollution, like a rule reducing fuel emissions standards. Four were bills about Native American reservations, adding 11,760 acres to the reservation of the Leech Lake Band of Ojibwe, officially nullifying an unenforced 1865 treaty that restricted the rights of tribal members in Oregon to leave their reservation, and creating a grant program to support entrepreneurship in Native American communities.

Continue exploring the State of the Earth 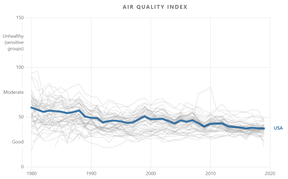 How has air quality changed across the United States since 1980?

Federal land leases for oil and gas in effect