How is the middle class changing?

The middle class is affected by the same demographic shifts as the wider nation, namely an aging population and a decrease in marriages.

It is common to speculate whether the middle class is growing or shrinking. To understand the middle class, it is necessary to first define what it means to be “middle class” in America. While definitions vary, one way to define it from a data perspective is the middle 20% of income-earners.

By definition, the middle 20% will always include one-fifth of the population, so the better question might be “how is life for those in the middle changing?” Comparing families and individuals in this group in 2000 and 2017 illuminates three ways in which their lives are changing.

The middle 20% shares some key demographic characteristics with the general population. Like the American population as a whole, those in the middle are getting older. This group included 43% more retirees in 2017 than in 2000 and the average age for heads of families increased from 47 to 49 years old. 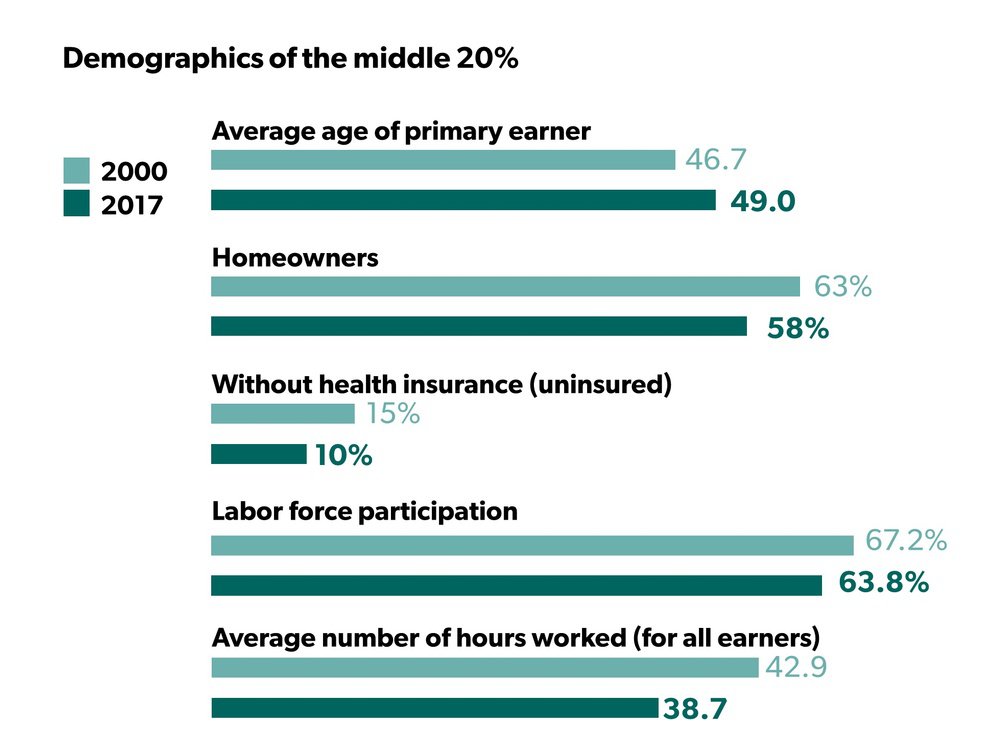 The middle class is working less and earning less money 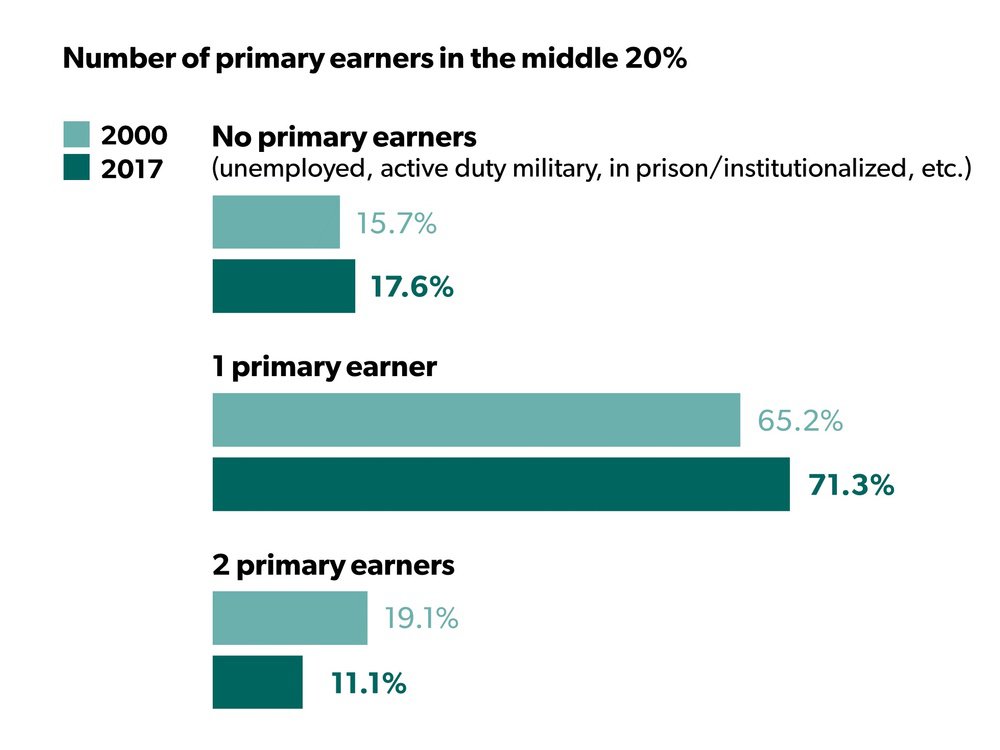 In addition to wage income; investment income has also fallen. Income from interest, dividends, and capital gains decreased from 2000 to 2017. However, private retirement income increased by 54%, likely driven by the increase in retirees. 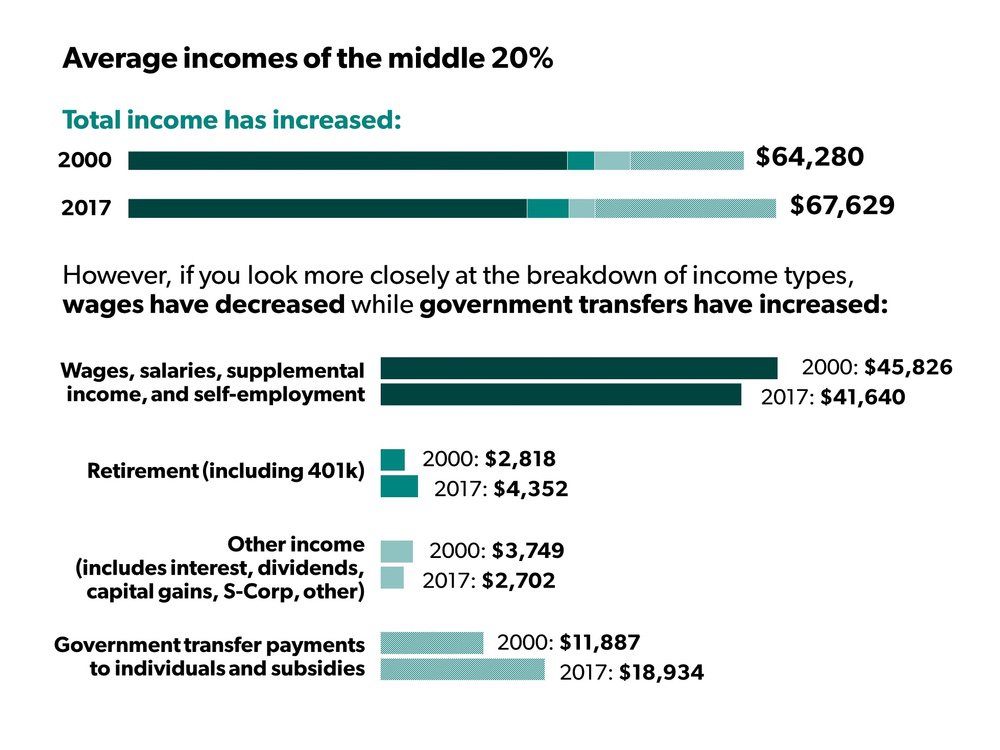 Despite earning less from wage income, the middle 20% makes more in total income than in 2000 when including transfers from government programs such as Social Security, Medicare, Medicaid, SNAP (food stamps), and unemployment insurance.

Transfers to the middle class are also increasing in part due to an increase in healthcare costs. National spending on healthcare increased 160% from 2000 to 2017.

Government spending on healthcare for the middle class, including programs such as Medicare, Medicaid, and the Children’s Health Insurance Program (CHIP), has also increased. Medicare payments increased from $2,556 to $4,437 per family unit, while Medicaid spending more than doubled, from $1,629 to $3,933. Meanwhile, employer-sponsored healthcare declined 12% in the same time period.

Other income-based assistance programs to families and individuals have also increased. Payments from the Supplemental Nutrition Assistance Program (food stamps) and Temporary Assistance for Needy Families increased 281% and 32% respectively from 2000 to 2017. 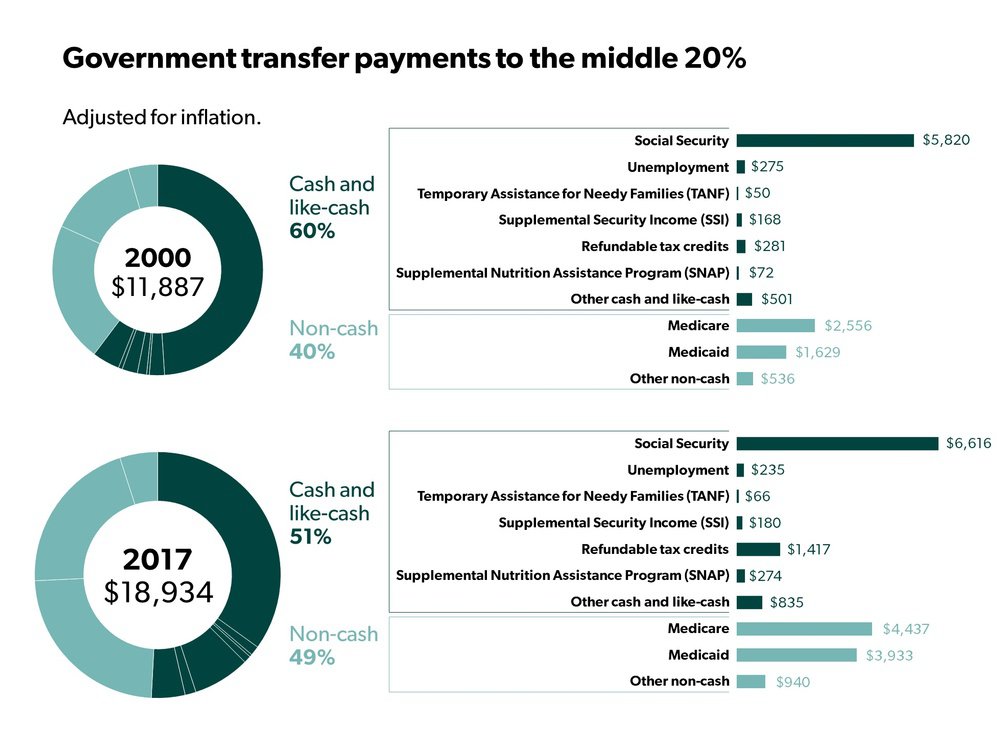 The middle class is affected by the same demographic changes affecting the population generally, namely an aging population and a decrease in marriages. This cohort is working less and earning less. However, the government is maintaining the middle class’ standard of living through higher transfers and lower taxes.

We combined IRS tax data with Census data to produce a variety of demographic and financial statistics by income and family type.

Total income of individuals after adjustments