The state of healthcare at the end of 2020

Americans — and their government — are paying more for health insurance at a time of uneven health risks across demographic groups and the COVID-19 pandemic.

Even before the coronavirus pandemic surged across the country, government data revealed that healthcare was getting costlier, and not always with improved results. 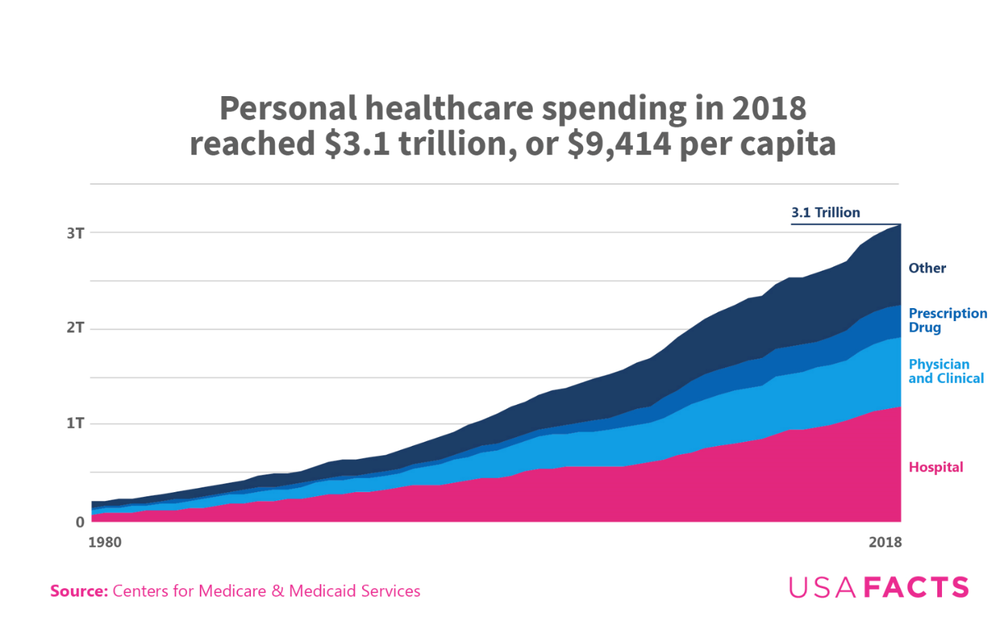 Healthcare is getting more expensive.

In 2018, personal healthcare nationwide spending was $3.1 trillion, which was roughly 15% of the nation’s gross domestic product. At approximately $9,414 per capita per person, healthcare costs were more than three times what they were in 1980 (adjusted for inflation). Healthcare costs are growing faster than the US population or general inflation.

Who has healthcare coverage?

While official numbers on health insurance during the pandemic are not yet available, 26.1 million people (8% of the population) lacked insurance last year. Compare that to 1990, when 14% of people were without coverage. The type of coverage also varies: 68% of Americans are covered under a private plan, and about 34% are covered by government health insurance like Medicaid or Medicare. Note that Americans can receive multiple forms of coverage at the same time, hence why these percentages don’t add up to 100%. 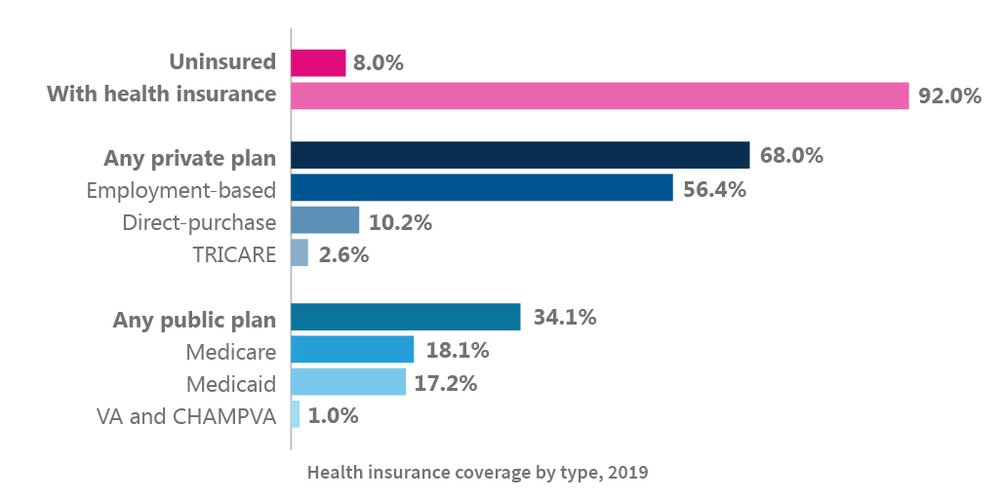 Healthcare coverage varies by race and ethnicity. Last year, 16.7% of the US Hispanic population was uninsured, the highest rate of any group. The uninsured rate for Black people was 9.6%. The rate was 6.2% for Asian populations and 5.2% for white people.

More than 30 million adults have heart disease in the US, up 11.9% over five years. Over that same time, the nation’s population increased 3.4% and the number of people 65 or older increased by 17.3%.

Health outcomes also vary by race and ethnicity. Take obesity rates: while the rates are higher among adults — as much as 47% for both Black and Hispanic Americans — there are disparities among childhood obesity rates. For example, 26% of Hispanic children ages two to 19 are obese, but only 14% of white children are.

What about the current COVID-19 surge?

This most recent wave has been concentrated in the center of the country, hitting North and South Dakota, Iowa, and Wisconsin particularly hard. In some of these rural areas — like Bon Homme County, ND — almost one in five people in the county have been confirmed with COVID-19 at some point. For daily data on the spread of COVID-19, visit this hub.

As has been borne out in other points above, not all Americans have been equally affected by various health factors, and the pandemic is no different. Black Americans account for 19.8% of COVID-19 deaths despite comprising 13% of the population. In the spring wave of the pandemic, Black Americans had a death rate that was more than double that of other groups. Hispanic Americans were the hardest hit group in second wave. It’s too early to definitively say which group will have the highest death rate in this third wave, but early data is showing an increase in deaths among white Americans.

Black Americans had the highest coronavirus-related death rate during the first wave of the pandemic.

The current state of health insurance, with its rising costs and uneven coverage, is not guaranteeing better outcomes for Americans. As the year ends, the nation is battling a coronavirus wave unlike anything it’s seen so far, all while millions of people, regardless of age group, are coping with a wide array of risk factors. Like everything else about this virus that is still unknown, so too is the data on how health insurance will aid citizens during this time — and how it might change afterward.