Is air travel getting more expensive?

Obesity hasn’t doubled. It’s nearly tripled in the United States over the last fifty years. We break down the data across age groups and states. We also look at the government numbers showing how obesity affects health and the pocketbook

In the early 1960s, fewer than 14 percent of the individuals possessed a body mass index (BMI) of over 30. Today, the figure collected by the CDCs National Health and Nutrition Examination Survey (NHNES) is closer to 40 percent. 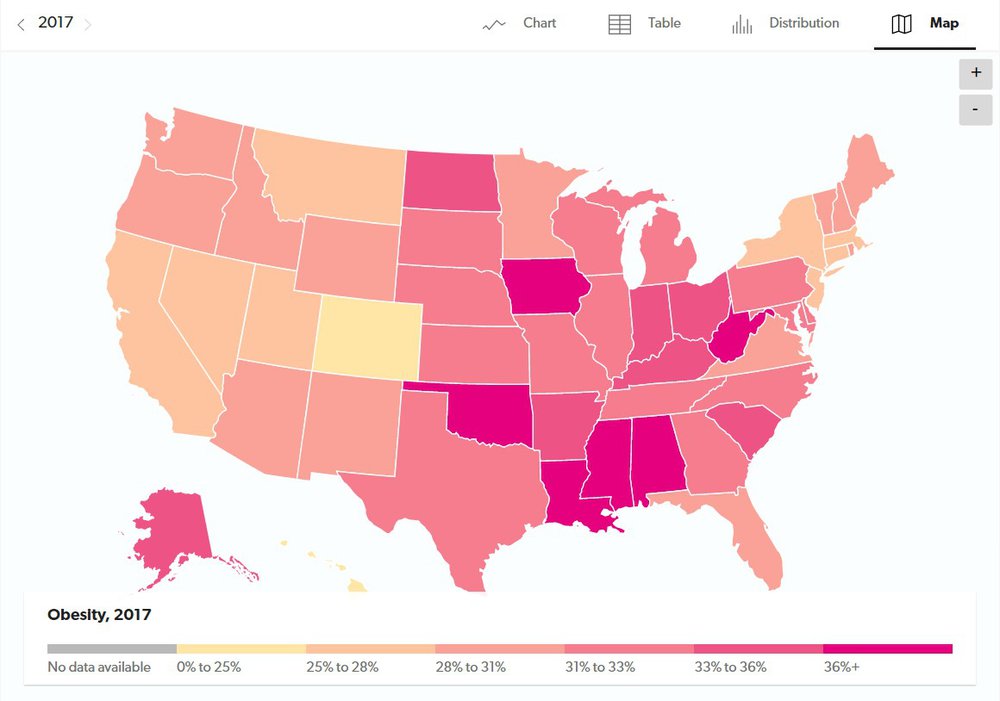 Map of Obesity across the U.S. states

The impact of more Americans becoming obese manifests as greater costs to both individuals and the government. There are significantly differing patterns of obesity throughout different demographics and states, but generally poorer Americans, minorities, those who are middle-aged, and Americans living in the South are those most impacted by obesity.

There’s no shortage of research linking obesity as a risk factor to Americans experiencing disease. The National Cancer Institute lists numerous cancers for which obese individuals face increased risk including pancreatic, liver, and thyroid cancers. Obesity has been found to increase the risk of several other serious diseases and health conditions including type 2 diabetes and heart disease. The Census reports that the two primary drivers of mortality are smoking and obesity; the agency notes that while reductions in smoking is driving declines in mortality, the countervailing obesity trend is reversing those gains. According to a CDC report, “obesity was estimated to be associated with 111,909 excess deaths in 2000 relative to the normal weight category.” To put that in perspective, that’s more than twice the number of transportation fatalities in that year.

According to the CDC, obesity-related medical care costs the United States public $147 billion a year.

The rise in obesity affects American pocketbooks too. According to the CDC, obesity-related medical care costs the United States public $147 billion a year. Roughly half of all medical costs associated with obesity are financed by Medicare and Medicaid. In terms of government spending, the cost of treating obesity in our healthcare system is greater than what all U.S. governments (federal, state, local, etc.) combined spend on public health in a typical year.

Obesity most afflicts the middle-aged and the poor

The trend in obesity is not evenly distributed throughout American demographics. Low-income Americans were more likely than higher earners to experience obesity in 2017. Roughly 36 percent of those earning less than $15,000 a year fit the CDC definition compared to 26 percent of those with incomes greater than $75,000 per year. A similar pattern holds for those with less than a high school education (36 percent). While Asians are the least likely to be obese (11 percent), non-Hispanic blacks and American Indians are the most likely to experience obesity (39 percent for both).

Young adult Americans are less obese than all other adult age groups, while middle-aged Americans are the most likely groups to meet obesity criteria: 36 percent of 45 to 54-year-olds and 35 percent of 55-64-year-olds. The rate of childhood obesity has tripled from roughly five percent in the early 1970s to almost 19 percent today.

Change in obesity over time across U.S. states

In more recent years, this trend has not abated with no state experiencing a significant reversal. A few states experienced a smaller change of less than a percentage point between 2010 and 2017: Michigan, California, Hawaii, and the District of Columbia. Of those four states, only Michigan was a high obesity state in 2010 suggesting that Michigan is one of the few states making strides in quelling the obesity epidemic. 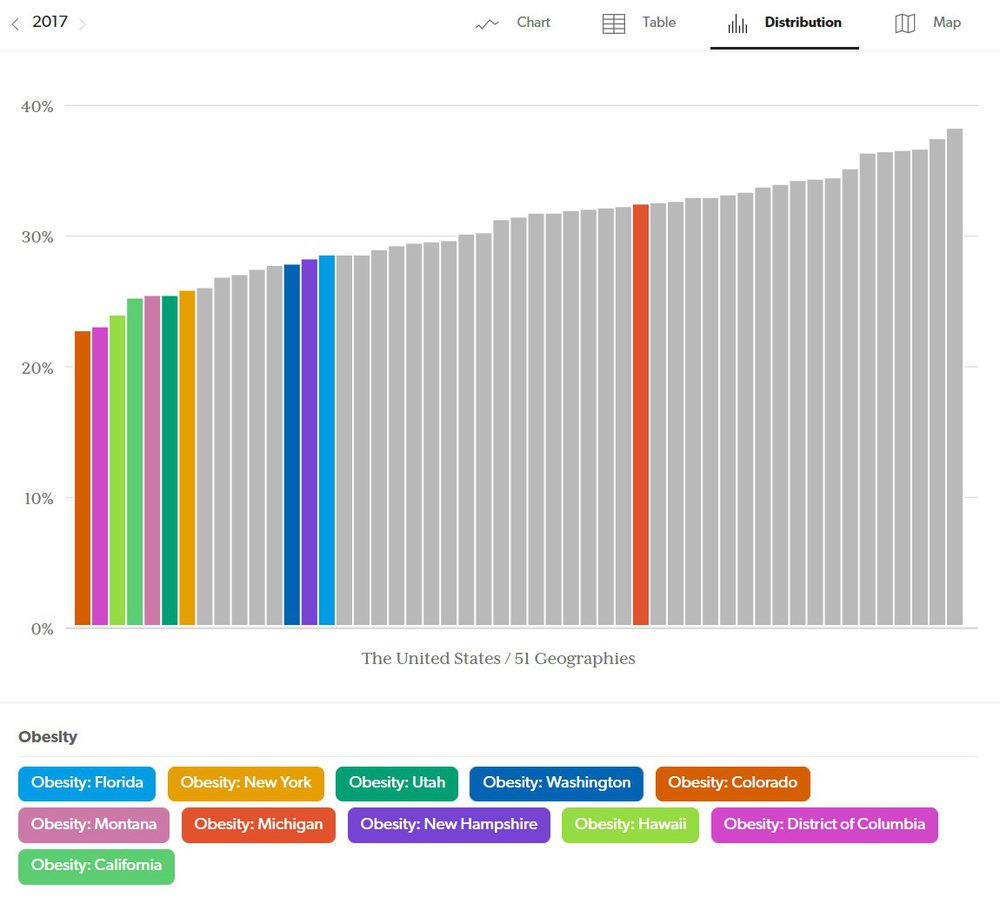 Histogram distribution chart of states with lowest rates of obesity

States where obesity rose the least also generally had the lowest obesity rates. In 2017, less than 26 percent of the population was obese in New York, Utah, Montana, California, Massachusetts, Hawaii, the District of Columbia, and Colorado. These states were generally the least obese states in 2010. Similarly, states with the greatest increase in obesity were some of the most obese states.

Seven states had an obesity rate of 35 percent or greater in 2017: West Virginia, Mississippi, Oklahoma, Iowa, Alabama, Louisiana, and Arkansas. Generally, these states were some of the most obese states in 2010 as well. 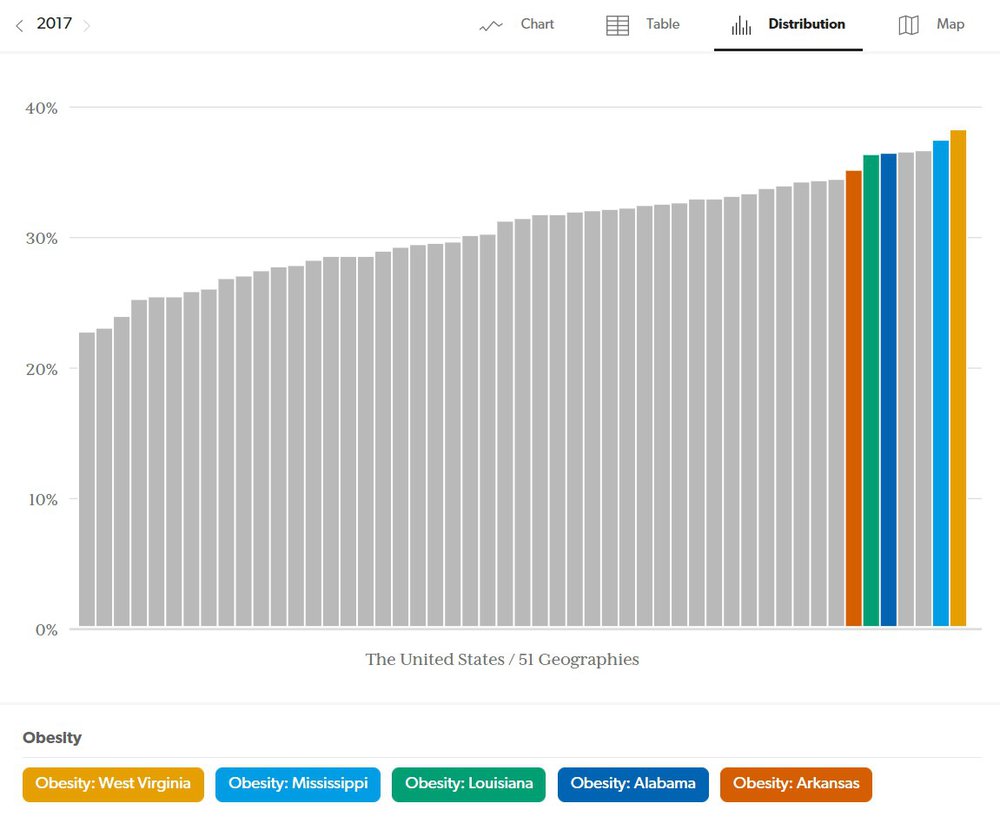 Histogram distribution chart of states with highest rates of obesity

Data cited in this exploration are sourced from two regular surveys the Center for Disease Control collects about Americans: the Behavioral Risk Factor Surveillance System (BRFSS) and the National Health and Nutrition Examination Survey (NHNES). Both surveys are nationally representative, but only the BRFSS collects data detailing state trends. BRFSS, started in 1984, is conducted by telephone in which Americans are asked about various aspects of their health including their height and weight. NHNES, started in the early 1960s, is conducted by trained medical professionals directly collecting data about Americans.

There is a gap between data reported in the BRFSS and NHNES surveys. BRFSS reports the national obesity rate for adults aged 18 and older at 31.6 percent, while NHNES reports a higher figure of 39.8 percent for adults 20 and older. For this reason, it is likely that BRFSS underestimates obesity since medical professionals are more likely to collect accurate data whereas people who may feel stigmatized about their weight status are therefore likely to underreport. But only BRFSS gives us the best available state data in a timely manner. NHNES gives us trend data going back further at the national data. Each set of numbers is useful to get a clearer picture of American public health.

Most Americans are now either obese or at risk of obesity

The CDC notes that 71.6 percent of Americans fit the criteria for being overweight (those with BMIs between 25 and 30) or obese. Overweight individuals are more likely to become obese and overweight individuals are also at increased risk for disease. The percent of the U.S. population that is overweight has remained roughly constant since the early 1960s. But taken in combination, the proportion of citizens fitting into either category has grown from about 55 percent in the early 1990s to almost 72 percent today.

Want to know your BMI? The CDC offers a calculator to determine your weight status. The CDC also offers sound medical advice on the issue. As they note, there is no simple solution, but behaviors like diet and exercise both play an important role.

Percent of adults with obesity

Percent of adults who are overweight

Percent of adults who exercise