7 Days of Pie: A week’s worth of delicious data

A healthy portion of pie charts and new articles from USAFacts, plus the 2021 Thanksgiving Fact Feast.

Celebrate Thanksgiving with a tantalizing buffet of government numbers from USAFacts. This is no side dish of data; this is a full-on fact feast. Mark this American holiday with charts, figures, and metrics on the American people and check back throughout the week for even more.

Have dessert first, starting with these seven pie (chart)s! 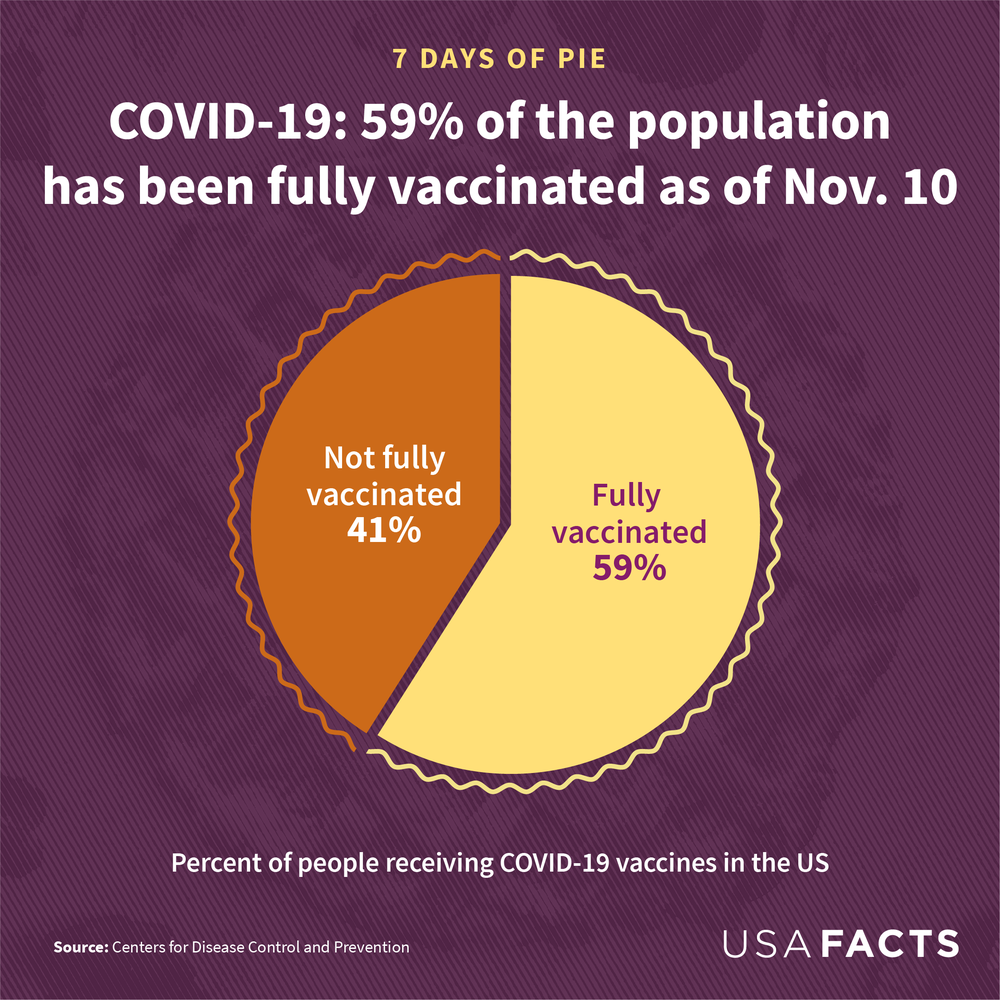 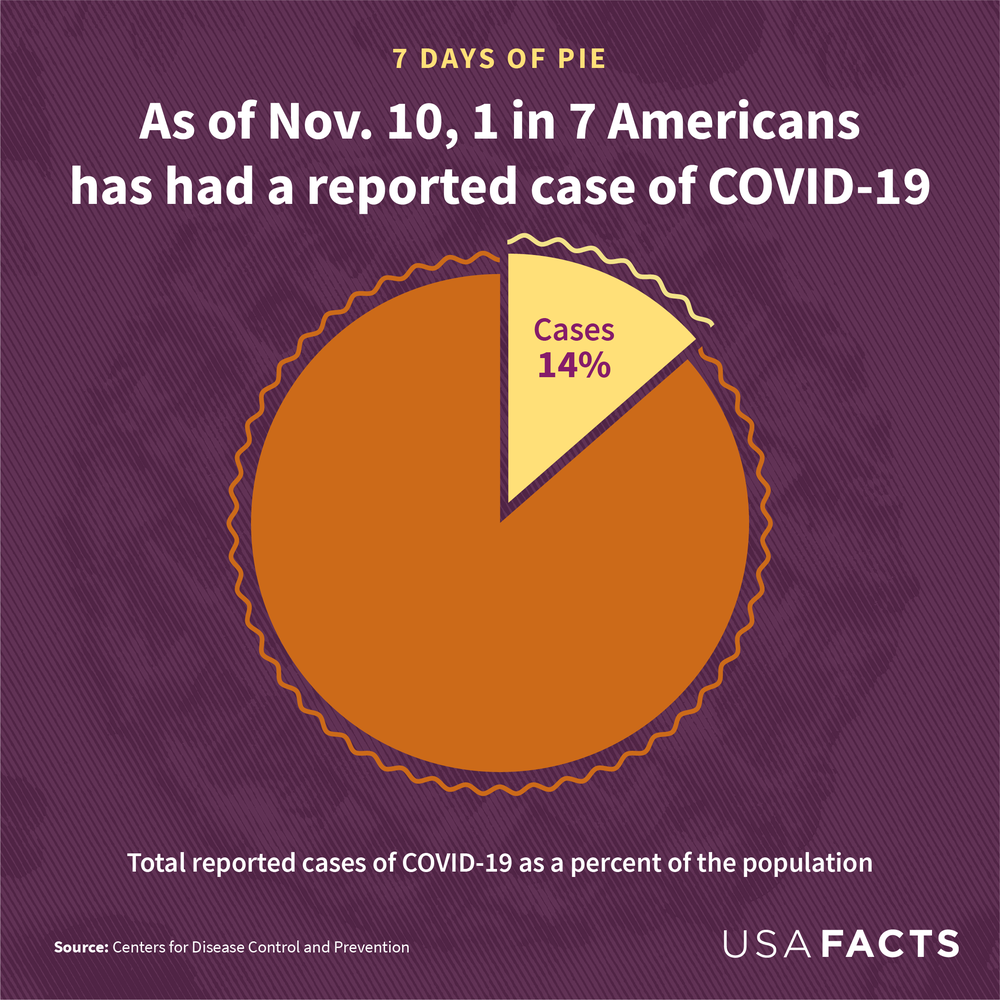 2. As of the 1st of November, 1 in 7 Americans has had a case of COVID-19. In mid-September — the peak of the Delta surge —  the nation had a seven-day average of 170,590 new cases. Cases dropped to 70,409 by the end of October. What do previous COVID-19 infections mean for immunity? Read this article to find out. 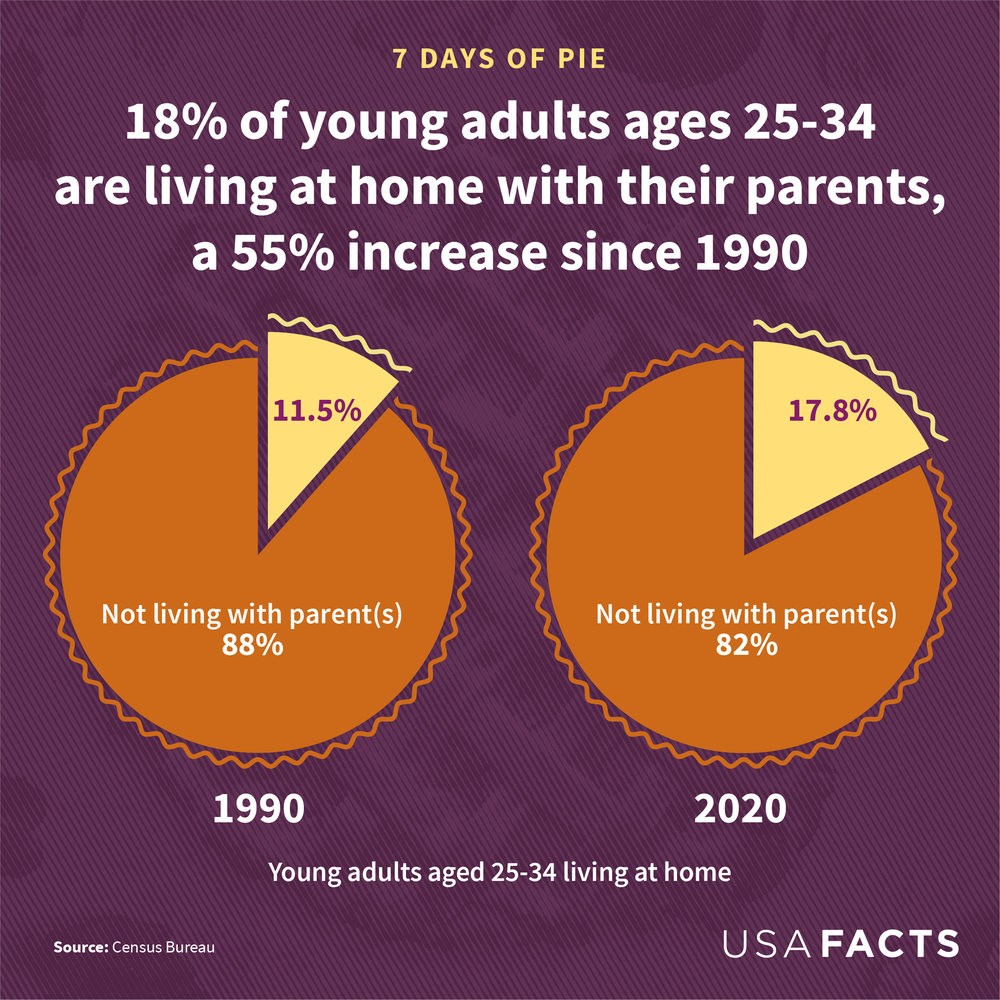 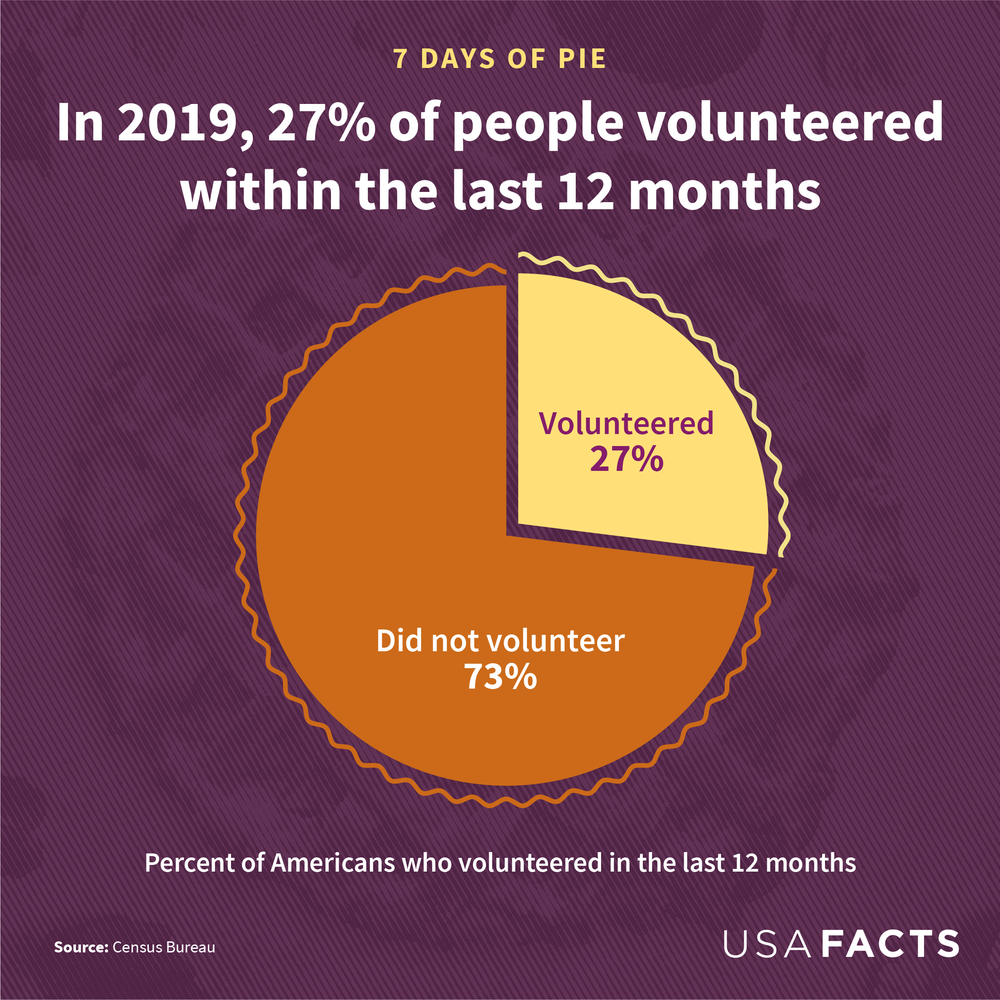 4. A little more than a quarter of Americans have earned themselves an extra piece of pie by volunteering in the past 12 months. Women are more likely to volunteer than men, and after years of the 65+ crowd in the top volunteering age group, their volunteering has dropped and people ages 35 to 49 now volunteer the most. 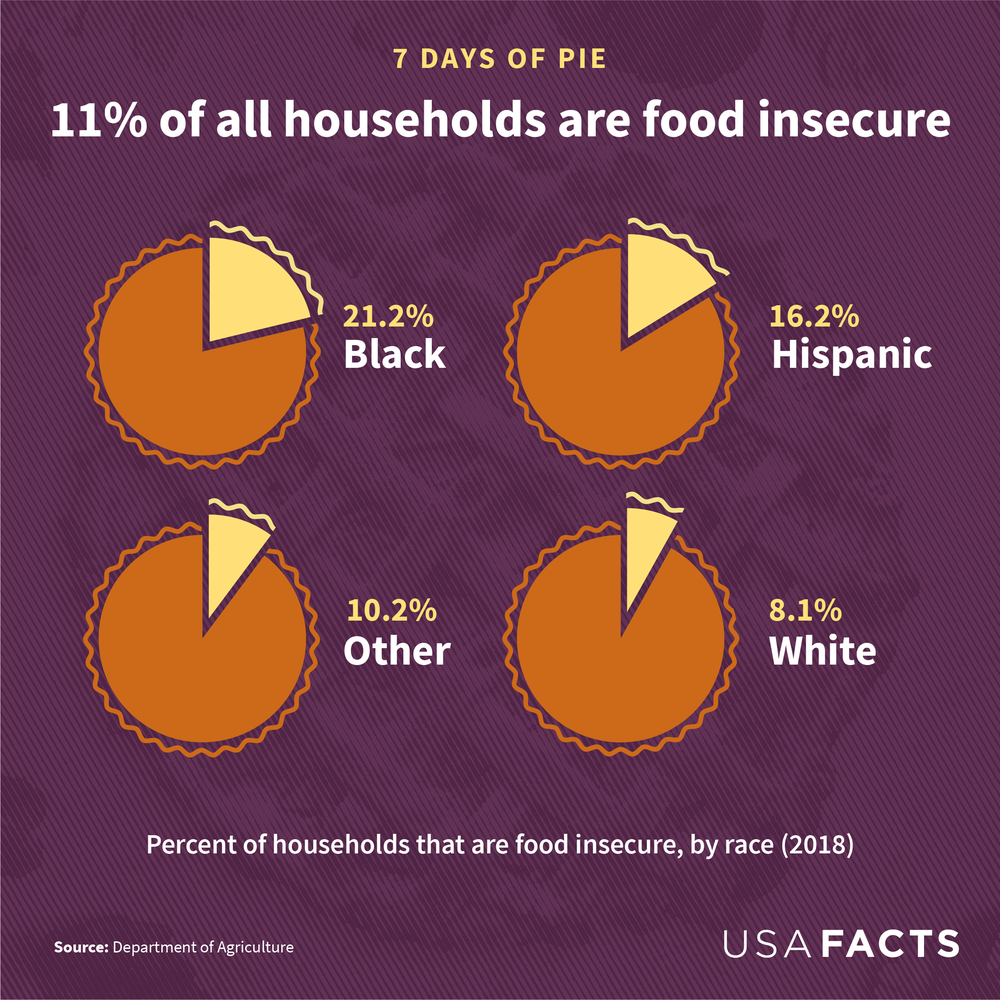 5. While Thanksgiving is a day celebrating the fall harvest, 11% of US households are food insecure. The issue is even more pronounced for Hispanic and Black households. 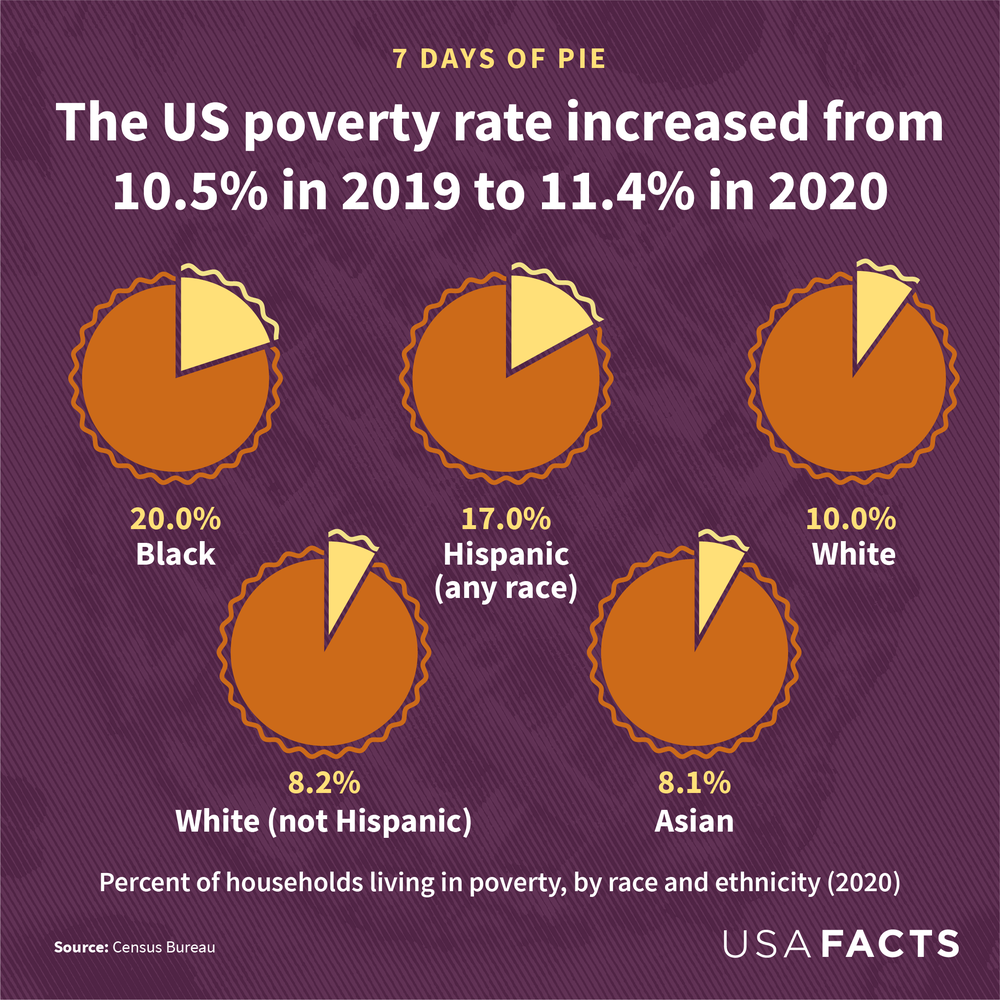 6. Amid job losses and the deaths of thousands of people, and despite extended unemployment and stimulus checks from the government, the nation’s poverty rate increased in 2020. Last year, approximately 3.3 million more people were in poverty than in 2019. 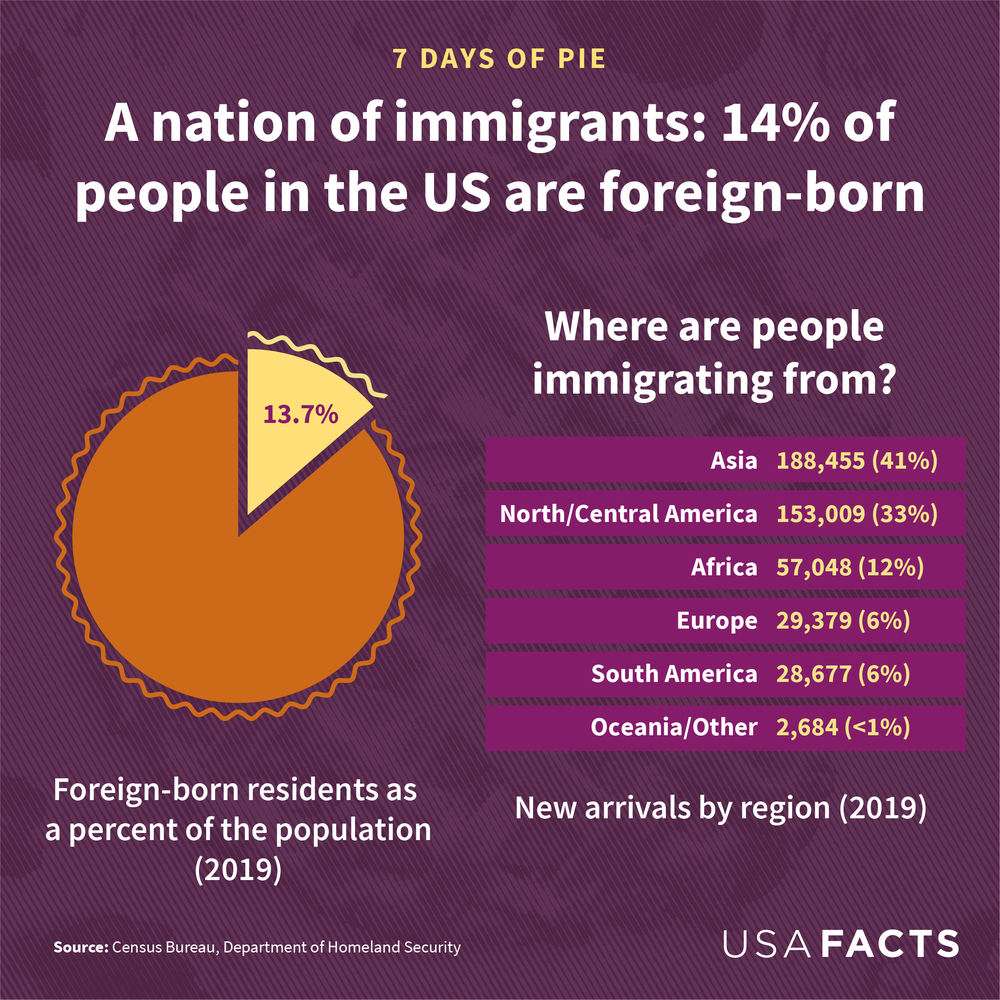 7. Just as Thanksgiving is a smorgasbord of dishes, the United States is increasingly a diverse, mixed populace. Fourteen percent of people in the US are foreign-born, up from 5% in 1970 and near the high of 15% in the early 1900s.

These pie charts are just seven of the truths about the nation today. See more in the Thanksgiving Fact Feast —it’s perfect for serving alongside topical debates at the dinner table. Perfect for gathering with friends and family in person or virtually, the Fact Feast is a mobile-friendly resource for data on issues ranging from climate change to COVID-19 to the federal deficit.

How much will Thanksgiving cost?

Food prices are up 5.3% from one year ago. USAFacts collected the figures on holiday food staples for a look at how much more Americans might spend on meals this season. If you're opting for ham instead of turkey, you might experience some sticker shock. 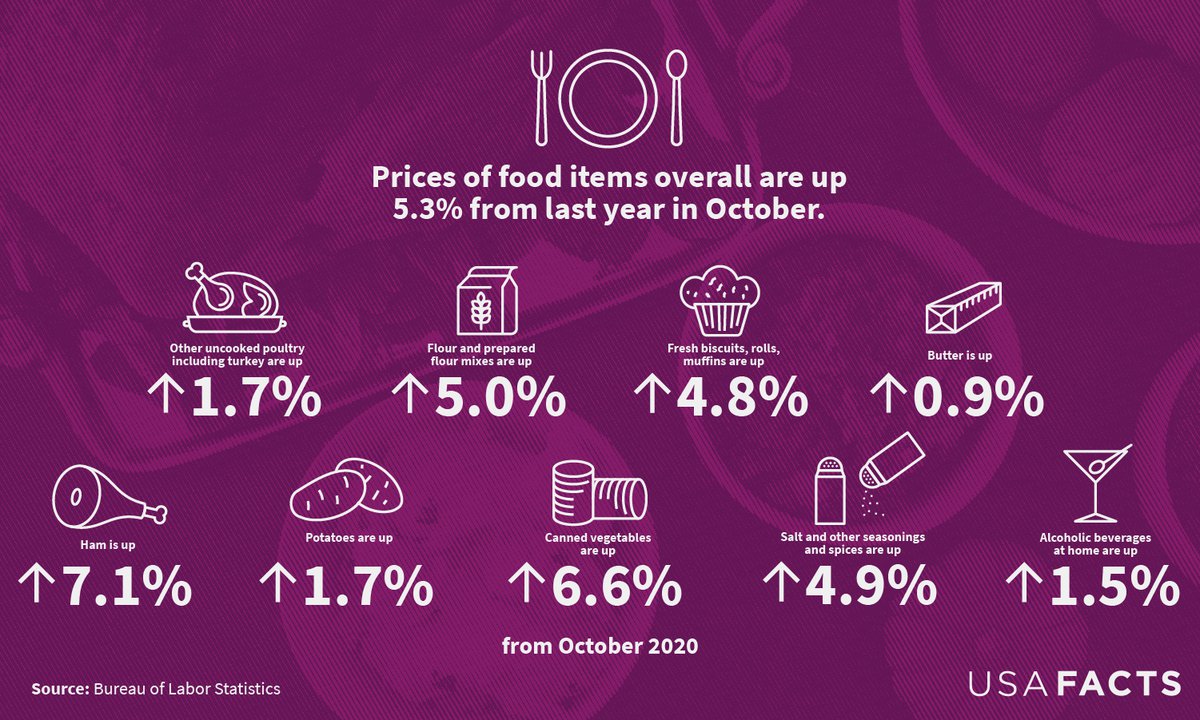 Some costs are also up for travelers this holiday, though anyone flying might be able to catch a price break.

Hungry for even more?

Grab a plate and dig into these articles for a second helping:

Where does Thanksgiving dinner come from?

See the metrics on the states that produce most of the foods on your Thanksgiving table. Minnesota is responsible for the star of the big day, producing 40 million turkeys in 2020. That’s 18% of the total turkeys produced nationwide, more than any other state. Click to learn about more Thanksgiving staples, including sweet potatoes, cranberries, and pumpkins.

How the Native American population changed since the last census

November is Native American Heritage Month. Figures from the 2020 census reveal more people identify as Native American than a decade ago. The Census Bureau partially attributed to question design changes and new procedures after an undercount on reservations in 2010. This more-robust reporting revealed that the native population more than doubled in 20 states and more than a million people claim at least some Cherokee heritage.

Thanksgiving dinner by the government numbers