What are prison work programs and how common are they?

How did the COVID-19 pandemic change America, according to new Census data?

How many people in prisons died of COVID-19?

The US must raise the debt ceiling by Oct. 18. What does that mean?

Despite a few close calls, the US has never defaulted on its debt.

On Thursday, Congress passed a continuing resolution to fund the government at current levels through December. The House and Senate still must raise the federal debt limit by October 18 or risk the US defaulting on its spending obligations.

Despite getting close, the US has never gone into default before.

But what is the debt limit? Why does it keep needing to be raised? And how is it related to the government shutdowns? 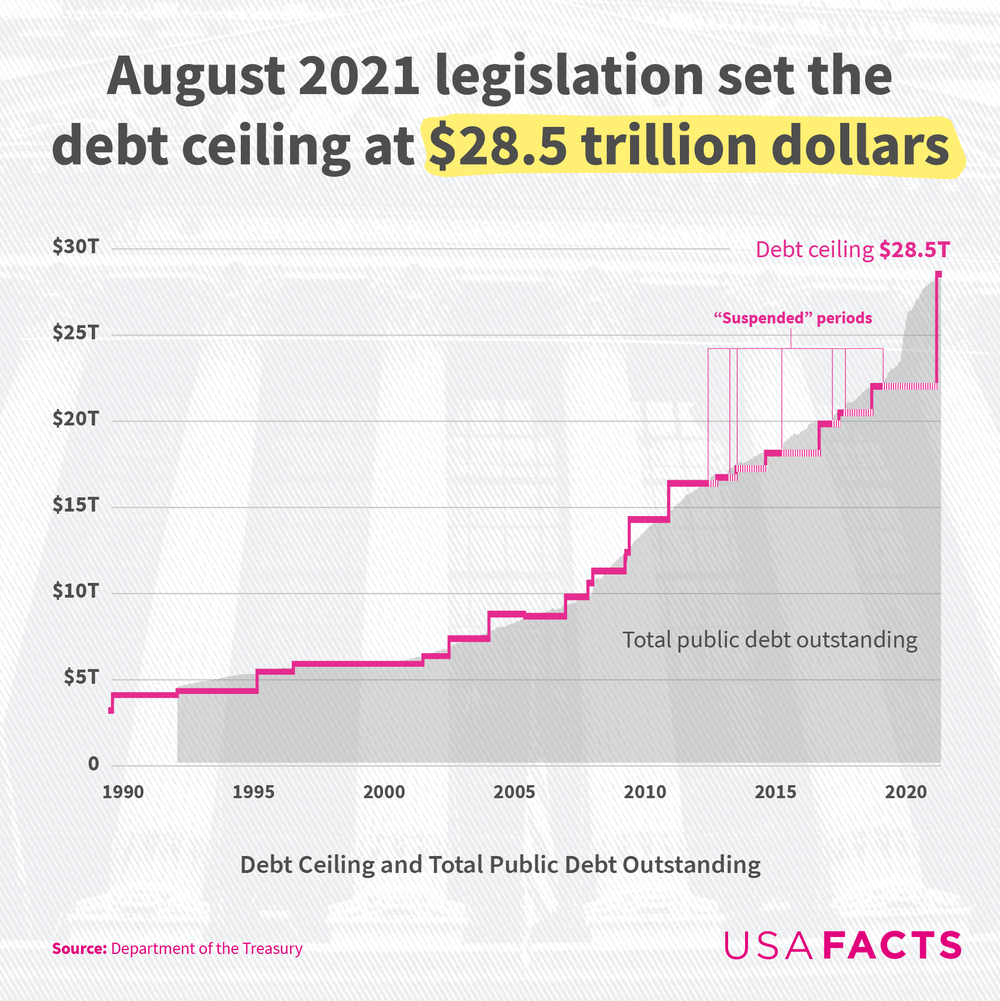 What is the history of debt ceiling increases?

Although the country has always placed limits on borrowing, the US managed those limitations on a nearly case-by-case basis for the first 150 years. This practice became cumbersome as the country’s government systems increased in complexity. In the 1920s and 30s, Congress delegated some authority to the Treasury Department to manage the US borrowing limits, but it did not solve the problem. In 1939, Congress passed a law that removed various separate limits on government debt and replaced it with a general restriction, what is now referred to as the debt limit or debt ceiling. The initial debt ceiling was set at $45 billion.

A pattern emerged over the next seven years. As the US reached the debt limit annually, Congress struggled to agree on raising the limit. The Treasury Department used extraordinary actions to keep the government going. Finally, Congress increased the debt ceiling to avoid defaulting on its obligations.

Since 2013, Congress instead has passed temporary suspensions of the debt limit. When the suspensions end, the debt limit resets to the debt amount at the time. The first suspension, from February to May of 2013, led to another round of extraordinary actions by the Treasury Department. In fall of that year, Congress suspended the limit again.

The most recent suspension ended on July 31, 2021. The Treasury Department has since been maintaining debt levels using extraordinary actions. On July 23, August 2, September 2, and September 28, Treasury Secretary Yellen sent official requests to Congress to raise the debt ceiling. In the most recent letter, Treasury estimated that its ability to manage the debt using extraordinary actions would be exhausted by October 18, noting, “It is uncertain whether we could continue to meet all the nation's commitments after that date.”

If the Treasury Department is not able to borrow additional money, the US could default on outstanding loans and its credit rating may be downgraded by credit rating groups in response. This would negatively impact the US economy and international financial markets.

What is the connection between the debt limit and a government shutdown?

Congress is required to pass a budget resolution by October 1, the start of the next fiscal year. If it does not, it can pass a continuing resolution that maintains spending at current levels. Failing to do so can result in the government shutting down due to a lack of funds. This results in a number of consequences such as furloughed government employees and the closing of national parks and other government facilities. Budget resolutions and the federal debt limit have been connected before although it is not required. From 1974 to 1994, Congress passed budget resolutions that raised the debt limit equal to new spending. In 1995, Congress listed the budget resolution and debt limits as separate items.

The cost of the longest US government shutdown

State and local debt as percent of GDP