See how the federal government has gathered race and ethnicity information as the reasons for doing so have changed over the centuries.

The Constitution requires a census every 10 years. How the government counts people by race has changed substantially over the decades. Racial categories emerged, disappeared, and came back again. Ethnicity became a category distinct from race in the 1980 census because Hispanic people can be of any race. Today, the Census Bureau notes that all race data is based on self-identification. It also states the racial and ethnic categories in census questionnaires “generally reflect a social definition of race recognized in this country and [are] not an attempt to define race biologically, anthropologically, or genetically.”

A timeline from 1790 to 2020 shows how census race and ethnicity questions have evolved.

In the first census in 1790, the federal government collected race data in three categories: free white people, “all other free persons,” and slaves. Three-fifths of the slave count went towards a state’s population figures used to determine apportionment of congressional seats. 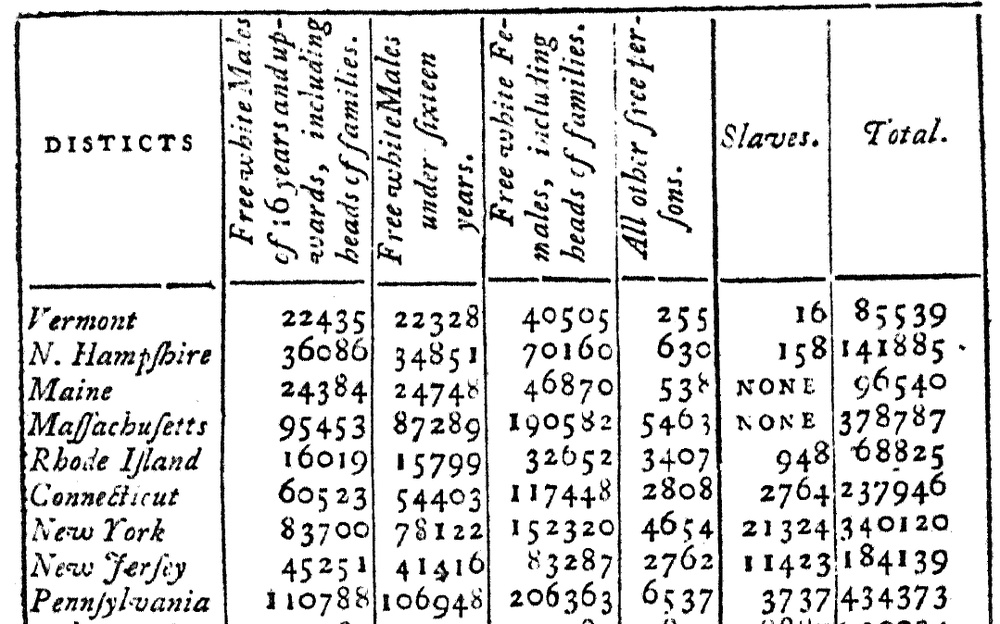 The 1820 census renamed the “all other free persons” category to “free colored persons.”

For free people, the 1850 edition offered three “color” options on the census for free people: "White, black, or mulatto.” Census instructions provided no guidance on how Native Americans living under US jurisdiction would be counted. “Mulatto”, meaning someone of mixed white and Black ancestry, would be on the census through 1920. According to the 1870 instructions to census workers, “important scientific results depend upon the correct determination of this class.” 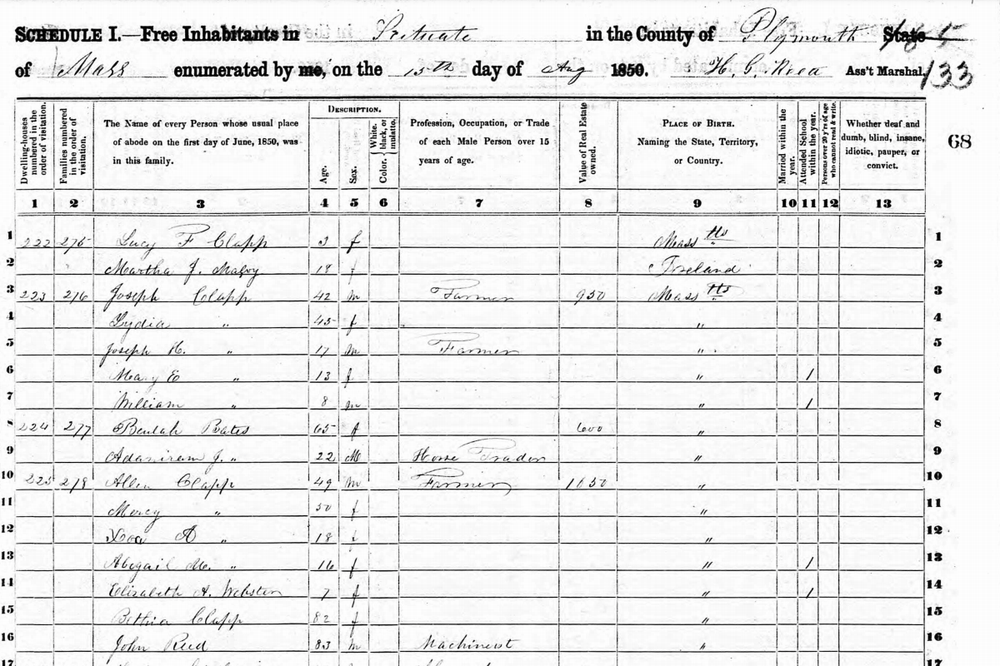 A count of free residents in Scituate, Mass., for the 1850 census. Census Bureau.

The 1850 and 1860 censuses had separate forms for enslaved people. Those people were counted under the name of their owners. 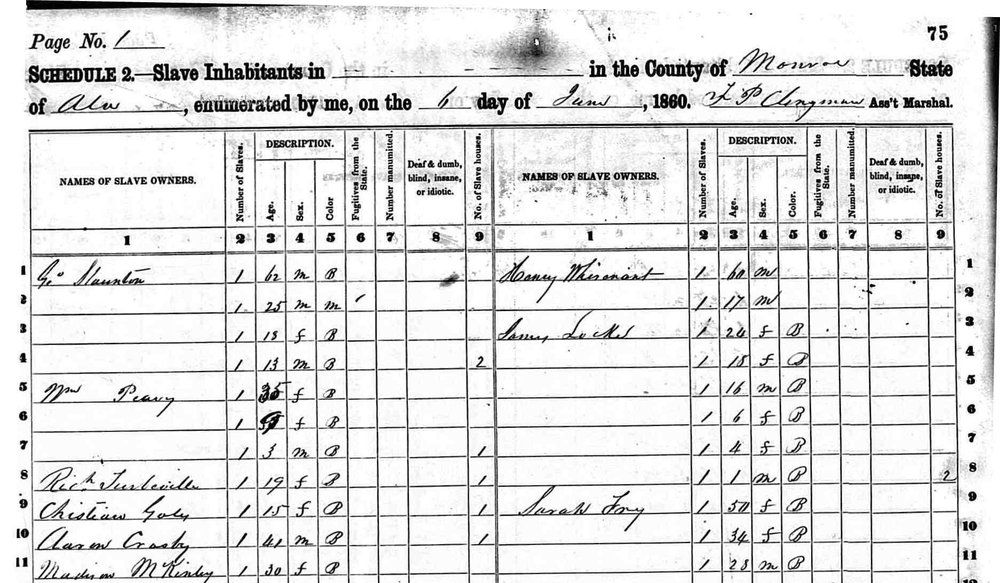 A count of slaves in Monroe County, Ala., for the 1860 census. Census Bureau.

The 1860 census added "Indian," though it still did not include Native people who were not under US jurisdiction.

In 1870, the census also introduced “Chinese” as a category nationwide, the first time the census counted any Asian identity.

The 1870 census was the first post-Civil War census and did not count people as slaves. People previously counted as slaves appeared in the “free colored” section of published results, and were counted as one person, not three-fifths, for congressional apportionment. It was the first census to document the surnames of former slaves. 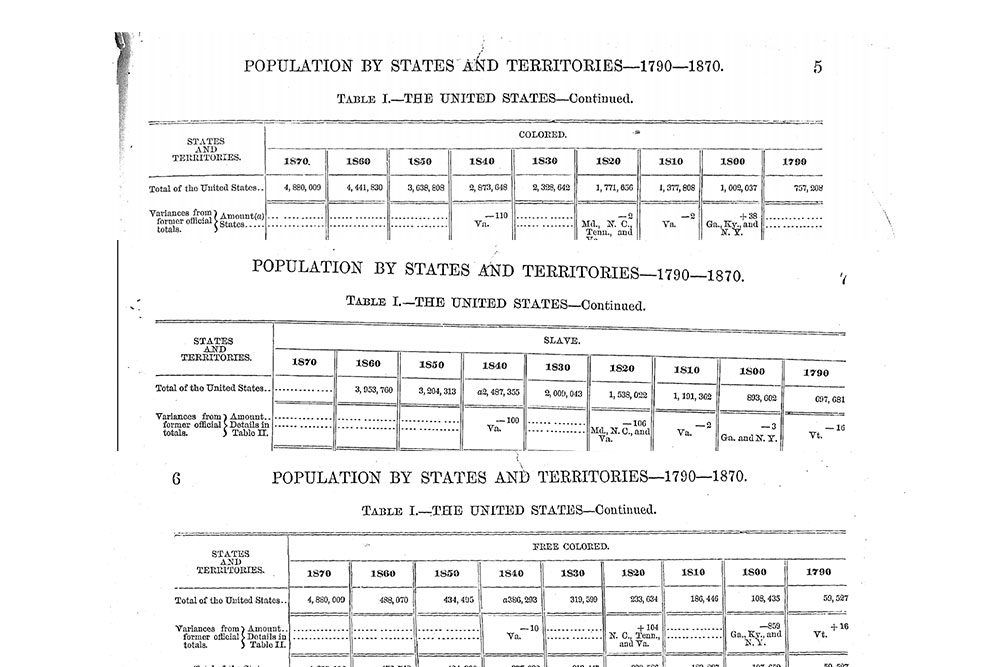 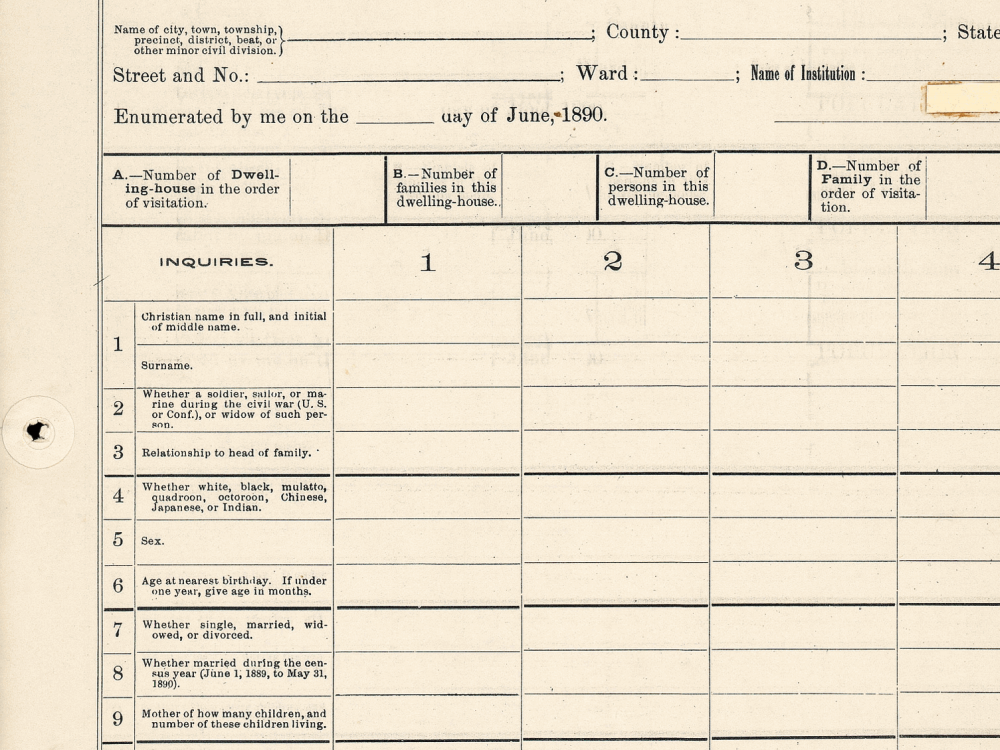 The 1900 form dropped the two new mixed-race categories. The 1900 census was also the first to count all Native Americans, both on reservations and in the general population. 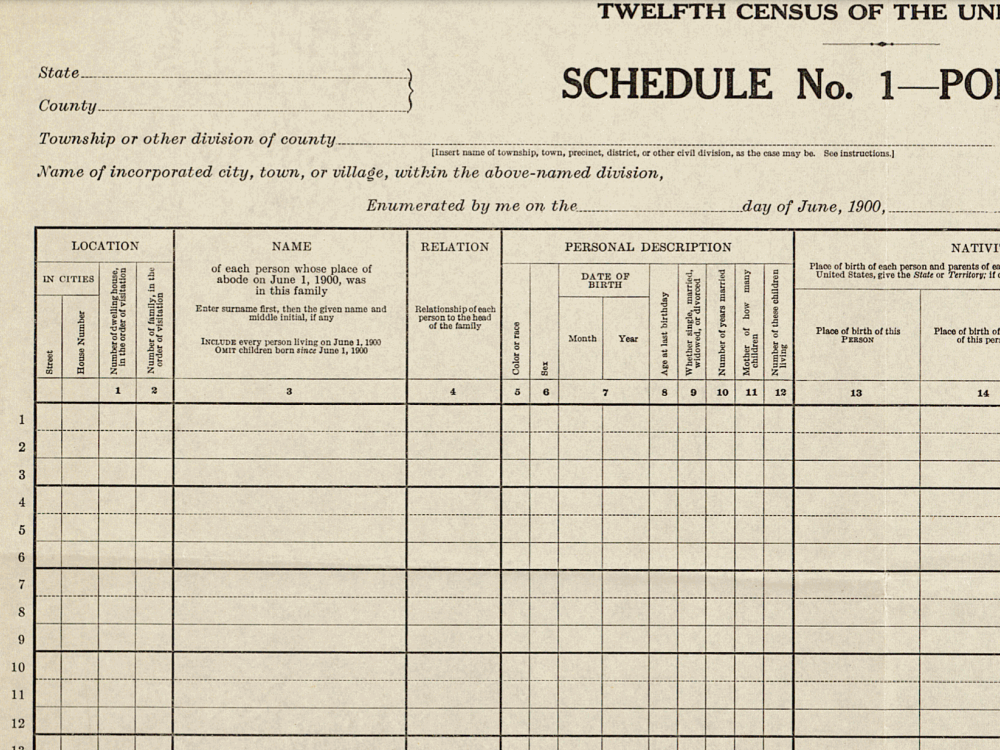 The 1910 census added an "other" category. Counters were instructed to note the details of the person’s race when using “other,” suggesting that people could identify with a race that wasn’t listed for the first time. 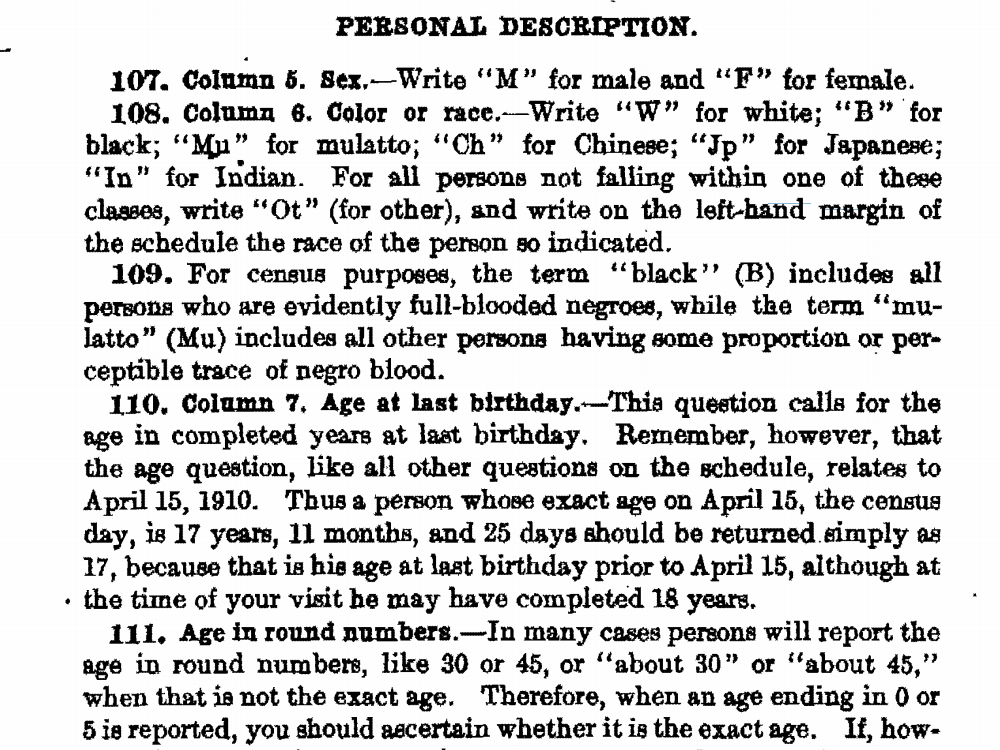 Four color or race categories were introduced in 1930: “Mexican,” “Filipino,” “Hindu,” and “Korean.” The “Hindu" category would appear again in the 1940 census, after which it was no longer a category.

Black Americans were coded as “Negro,” the first time that term was used as a racial category in the census. Censuses used the term was used until 2010, sometimes combined with the terms “Black” and “African American.”

The 1940 census dropped the “Mexican” category. According to the instructions for counters in 1940, “Mexicans are to be regarded as white unless definitely of Indian or other nonwhite race.” From 1950 to 1970, the census counted white people with Spanish surnames in five states: Arizona, California, Colorado, New Mexico, and Texas. 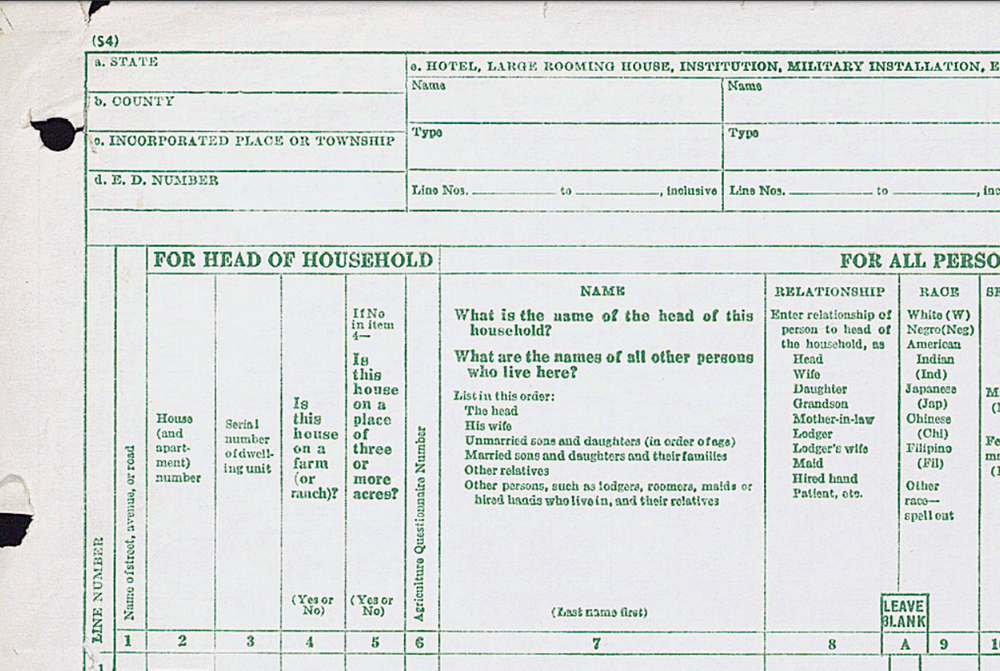 After Alaska and Hawaii became states in 1959, the 1960 census named four new categories: “Hawaiian”, “part Hawaiian”, “Aleut”, and “Eskimo”. The 1970 form kept the “Hawaiian” category and dropped the other three. 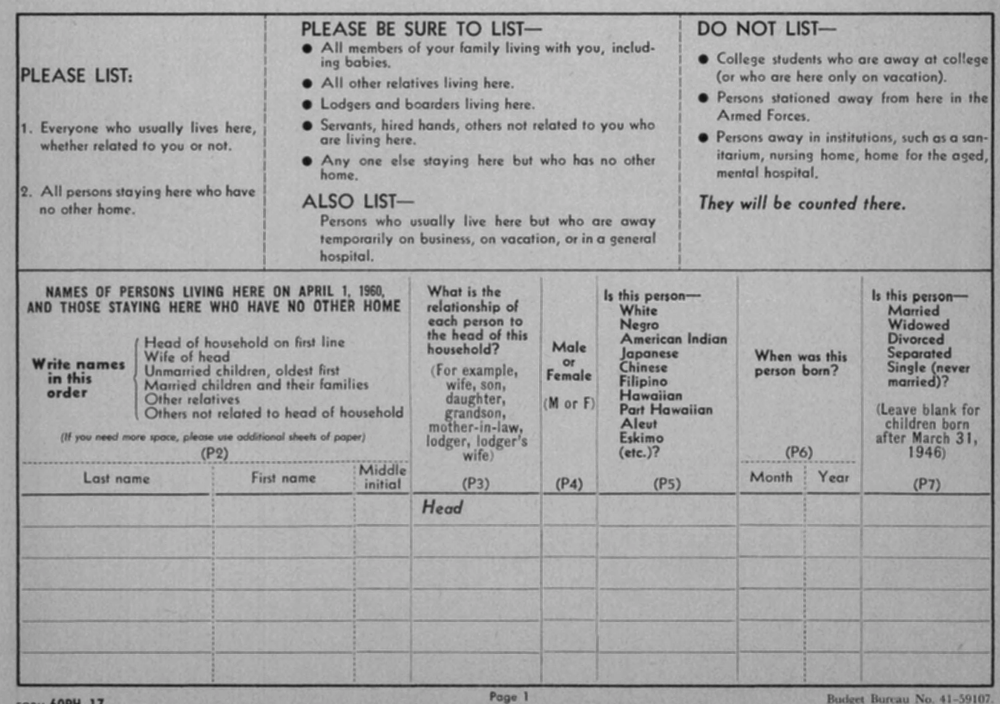 Two federal changes in the 1970s affected the 1980 census. A 1976 law required the federal collection of data on people of “Spanish origin or descent.” Then a 1977 directive established race and ethnicity data collection standards across the federal government. The standards were intended to enforce civil rights laws.

The 1980 form had several additional options in the race category, adding back “Eskimo” and “Aleut” while introducing “Vietnamese”, “Asian Indian”, “Guamanian”, and “Samoan”. As a result of the 1976 and 1977 changes, the 1980 census introduced the idea of "Spanish" or "Hispanic" origin in a separate question, offering options to identify as “Mexican”, “Puerto Rican”, “Cuban”, or “other”. This is the first time the Census asked about ethnicity separate from racial identity. 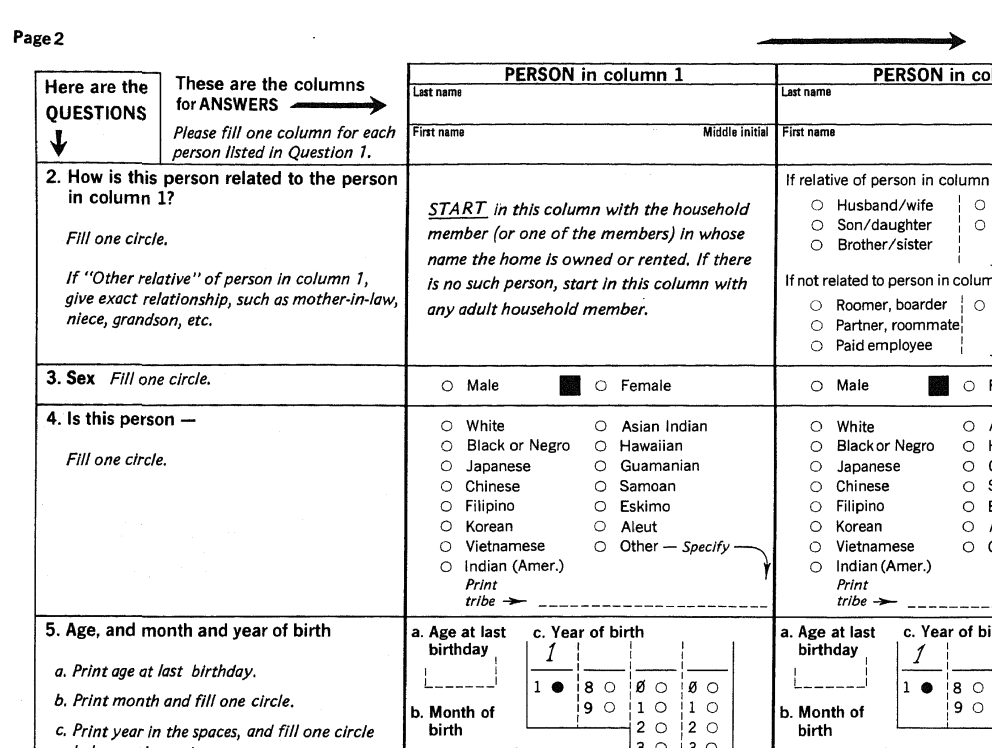 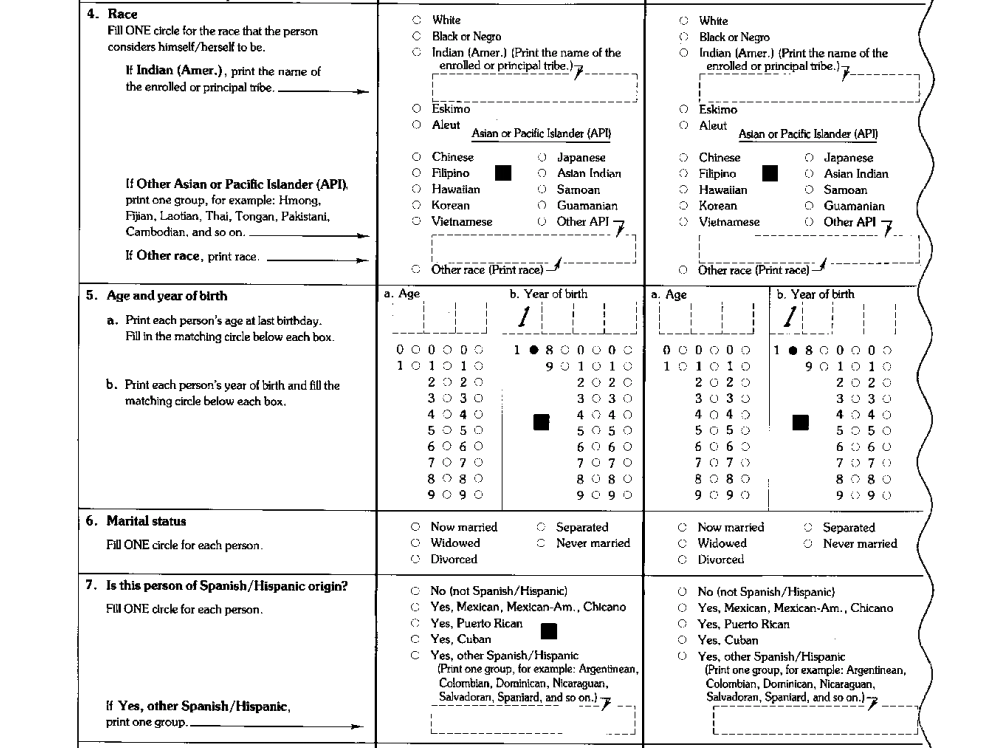 After a change to the 1977 directive separated the Asian and Pacific Islander categories, the 2000 form offered different write-in options for "other Asian" and "other Pacific Islander." The 2000 form was also the first to instruct people to mark "one or more races." It also added the term “Latino” alongside “Spanish” and “Hispanic” for ethnicity. 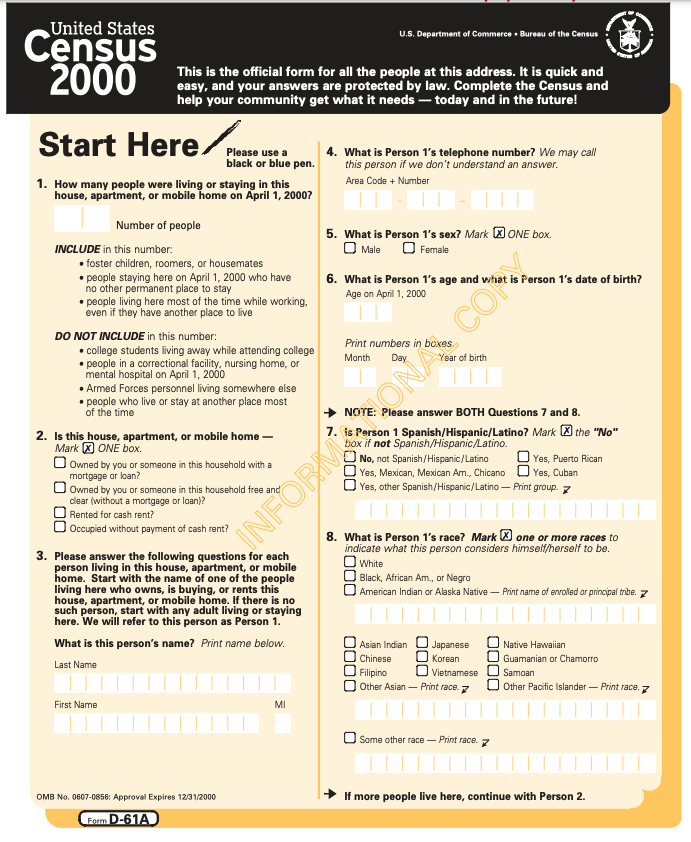 The 2010 census added write-in examples for “other Asian” and “other Pacific Islander.” 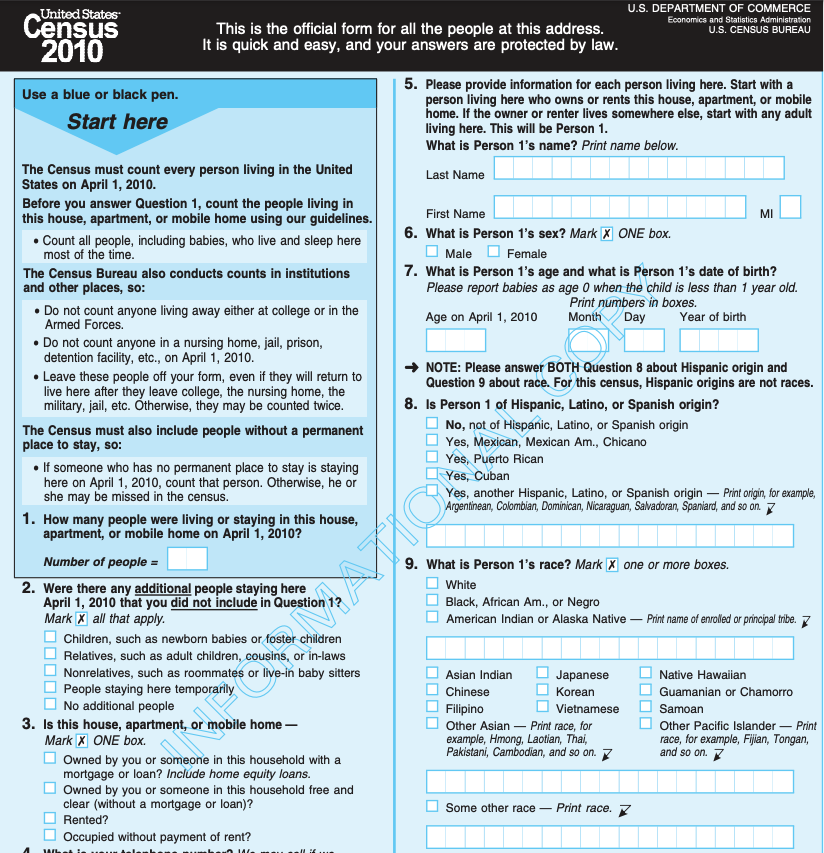 The 2020 census offered Black and white Americans the opportunity to write in their ethnic origins for the first time. 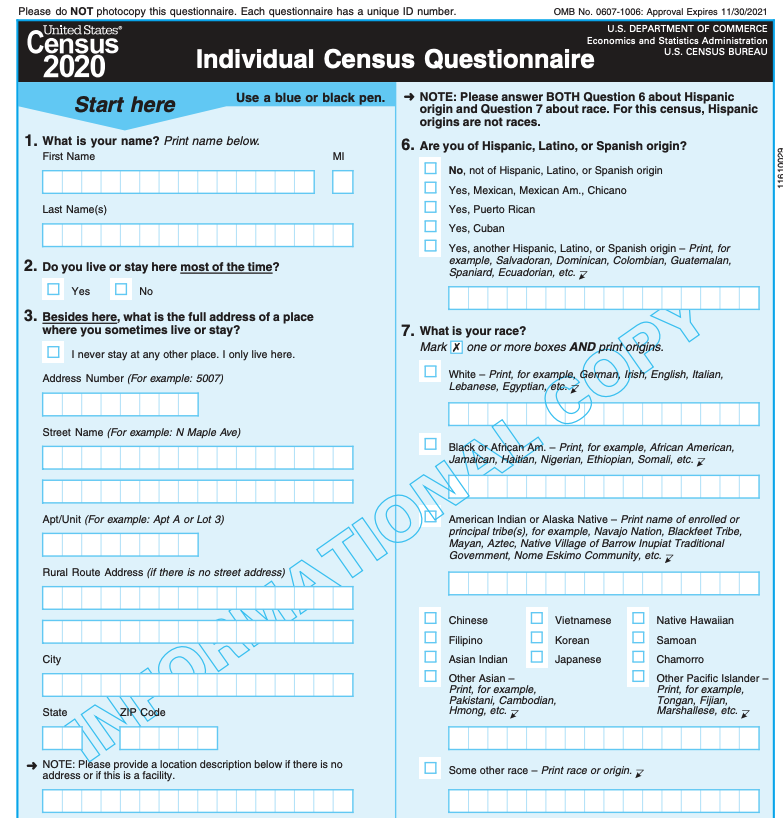