More and more Americans are going to college as tuition increases. But what’s the actual cost of higher education? Here’s an analysis of how colleges finances work and how tuition factors in.

More and more Americans are going to college. According to data from the Department of Education National Center for Education Statistics (NCES), in 1980, 50% of high school graduates between the ages of 16 and 24 were enrolled in college; in 2016, it was 70%. In 2016, 19.3 million undergraduate students were enrolled in higher education institutions. 70% were enrolled at public schools, 23% at private non-profits schools and 7% at private for-profit schools. The cost of going to college has also changed since 1980 — however, how much it has changed depends on whether you look at the “sticker price” or the net price after financial aid.

After adjusting for inflation, the average undergraduate tuition, fees, room and board has more than doubled since 1964, from $10,040 to $23,835 in 2018. Tuition has recently grown the fastest at public and private non-profit institutions, for which tuition has gone up 65% and 50%, respectively, since 2000. Tuition at private for-profit institutions has only increased 11%. However, as we describe below, the sticker price (our term for full tuition without aid) only reflects what one shrinking group of students pays for college.

As tuition has increased, the revenue makeup for many institutions has also shifted, with government funding making up a smaller proportion of revenue for schools, and tuition payments making up a larger proportion. At public institutions, state, local and private funding has decreased from making up 50% of revenue in 1981 to 29% in 2016. It’s not just public schools experiencing a shift in funding sources. Private institutions, which have historically relied on tuition and fees even more than public institutions, have also seen federal funding drop from 19% of revenue to 13%. Tuition payments are making up a larger proportion of their revenue as a result. University-affiliated hospitals are also increasingly important revenue streams for public and private schools, as well as a growing component of institution expenditures.

Despite these shifts in revenues, colleges have not really altered how they spend money. Public schools spend heavily on instruction and student services, with expenditures shifting slightly from instruction to student services during the last 30 years. Both private non-profit and for-profit institutions also spent most of their revenue in these areas, though non-profits have shifted more dollars away from student services and more toward “Other” spending (a miscellaneous category that contains expenses that don’t fit in other categories, such as an early retirement program for faculty and staff), while for-profit institutions have shifted dollars toward student services.

Auxiliary enterprises in the United States

Student tuition and fees in the United States

Federal grants are the most common type of aid students receive — about two in five students at public and non-profit schools receive some form of federal grant aid compared to two-thirds of students at for-profit schools. There are four major types of federal grants, the largest of which is the Pell Grant program, which is available for students for whom the difference between cost of attendance and the expected family contribution exceeds a certain amount (roughly $600 for full-time students according to information provided in a student’s FAFSA (IFAP)).

Across almost all categories and school types, more students are awarded grant aid to pay for school, meaning fewer students are paying the list price. In 2000, 44.4% of all undergraduates received grant aid, whereas in 2016, that number increased to 63.1%.

Instruction in the United States

Student services, academic and institutional support in the United States

Student services, academic and institutional support in the United States

Note: These categories are not mutually exclusive — many students receive multiple types of aid. The population covered in this table is first-time, full-time students at degree-granting institutions.

While federal grants are the most common form of aid, the largest forms of aid from a monetary standpoint, are institutional grants and scholarships. The average amount of federal aid received per student receiving aid ranged between $4,453 and $5,208 per school year.

Note: These categories are not mutually exclusive — many students receive multiple types of aid. The population covered in this table is first-time, full-time students at degree-granting institutions.

So, what does this mean most students end up paying? For the roughly 55% of students receiving any form of federal aid—including federal grants, loans, or work-study aid — the average annual net price of the school, or the sticker price minus any government or institutional grants and scholarships, was $16,147 in the 2016-17 school year.

This average net price varies based both by the student’s family income and by the type of school. A family earning $30,000 per year may on average pay $9,510 per year for their child to attend a four-year public institution (48% of the average sticker price). Enrolling in a four-year, private non-profit institution would cost $20,150 per year, or 44% of the average private non-profit sticker price.

Note: Net price data is for students receiving some form of federal aid—including federal grants, loans, or work-study aid. For this reason, data for students from higher-income families is more limited and may not be representative.

When looking at students receiving any form of federal aid, the net price of college has not dramatically changed since 2010. While the sticker price average for four-year institutions has increased 12.4% since 2010, the net price has only increased 1.7%. For two-year institutions, the sticker price increased 10.8%, whereas the net price decreased 5.6%. The percent of students receiving any form of federal aid has also increased from 36.6% in 2001 to 55.9% in 2016. This appears to be part of a larger trend of federal funding shifting from operating grants and non-operating appropriations to non-operating grants, which includes grant aid to students like Pell Grants.

However, not all students who need financial help qualify for federal aid and increasing sticker prices are still felt by many students. In 2017, while 56% students received federal aid, 83% of students received either government or institution grants or student loans (excluding Parent PLUS loans). For many students, what’s left over after grant aid — if they even receive grant aid — requires student loans.

How did the US reach $1.6 trillion in student debt? 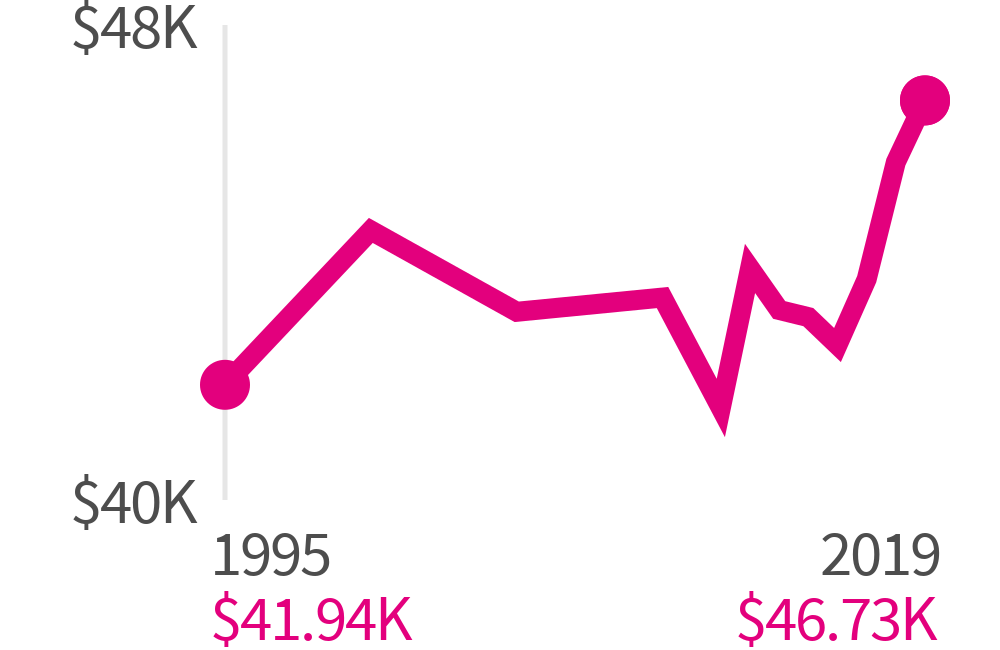 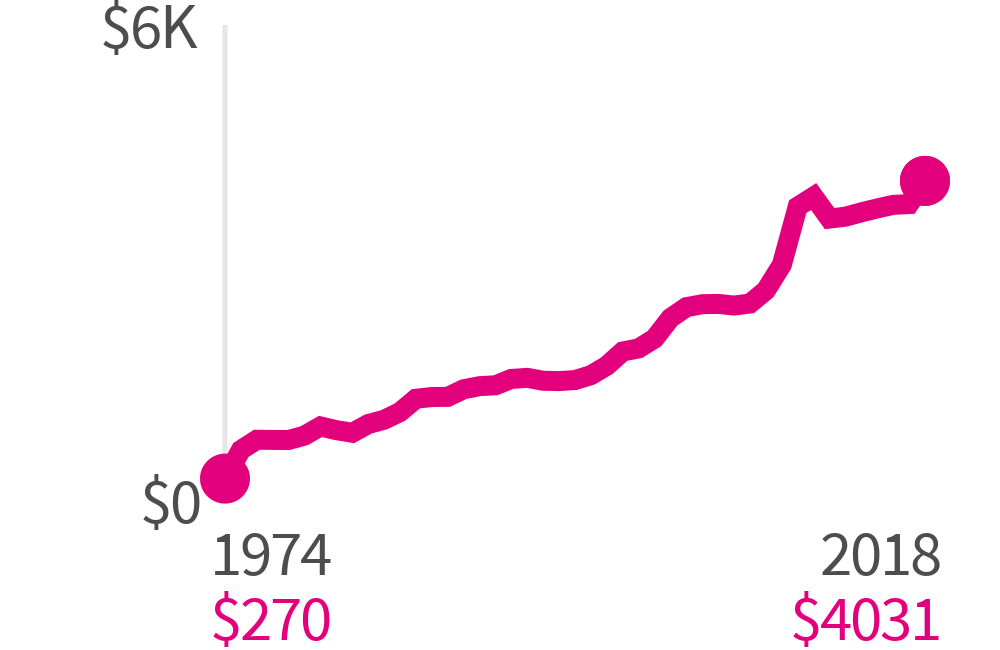 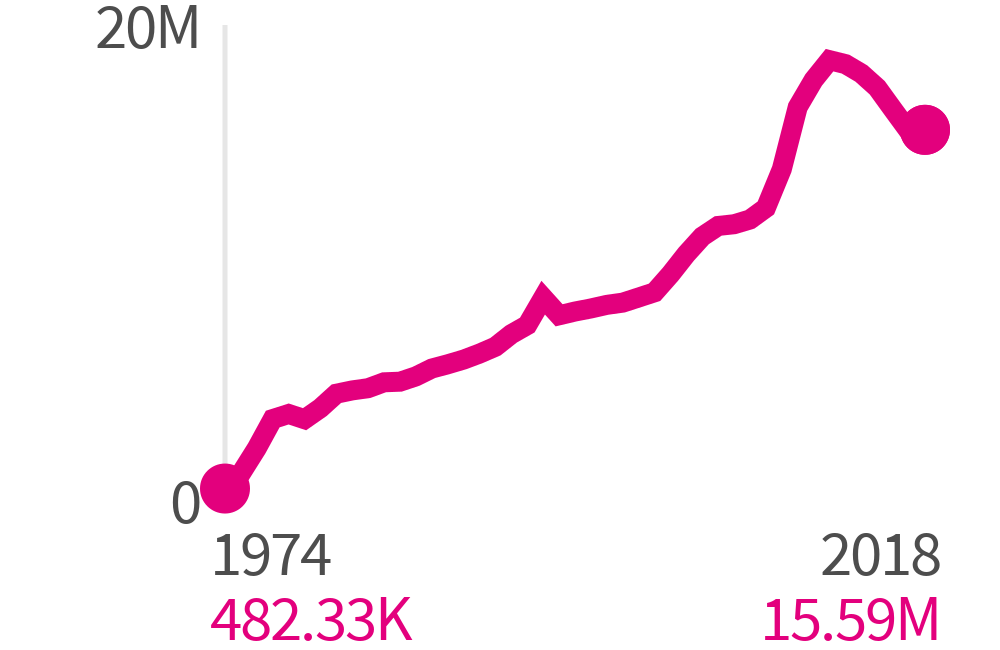