Delve into asylum data, which shows a spike in recent years of migrants coming from Central America. Learn how the case backlog grew to hundreds of thousands.

The number of asylum cases pending before the federal government are in the hundreds of thousands, a figure that increased in recent years due to an influx of migrants from Central America and Venezuela.

The rise in such cases has been a focus in the Trump administration. In April, the president called on the two departments in charge of deciding asylum cases — Department of Homeland Security and the Department of Justice — to implement new changes to the asylum process that would seek to not only process claims faster, but charge asylum seekers money to apply and, in some cases, prevent asylum seekers from working in the United States until status is granted.

Here’s a look at the growing asylum backlog and where the asylum seekers are coming from.

In the United States, asylum cases take two different forms. “Affirmative” asylum seekers actively apply with the Department of Homeland Security’s Citizenship and Immigration Services (USCIS). “Defensive” asylum seekers are those seeking asylum once facing removal proceedings before the Department of Justice’s Executive Office for Immigration Review (EOIR). This type of asylum also includes cases of people caught at ports of entries or borders who cite that they cannot return to their home countries due to fear of persecution.

Both types of asylum cases have seen spikes in number of cases filed and the case backlog in recent years. For example, the number of pending affirmative asylum cases in front of USCIS in January 2019 stood at 325,277, more than 50 times higher than the 6,382 pending cases in January 2010.

After an affirmative asylum application is filed, an asylum officer is supposed to schedule an interview within 45 days and a decision is expected to be made within 180 days. In practice, those deadlines have been hard to meet.

In January 2018, USCIS changed its policies for dealing with backlogs to prioritize cases in a new order, focusing on the newest cases first (applications submitted within the last three weeks) and working back toward older ones. Since that policy went into effect the number of pending cases has increased less than 5 percent from about 311,000. A similar priority policy was in place from 1995 to 2014 and was used to address the backlog during that time.

Asylum officers usually process these cases within 14 days before making a decision either denying entry or referring the case to immigration courts.

Where the asylum seekers are coming from

Though two other countries — Mexico and China — are consistently responsible for a large proportion of asylum cases in a given year the recent spikes can be attributed largely to four countries: El Salvador, Guatemala, Honduras, and Venezuela. In fiscal year 2017, El Salvador was responsible for at least 18 percent of about 260,000 asylum cases, while Guatemala contributed 13 percent and Honduras 10 percent.

Migration from the three Central American countries is being spurred by a variety of factors, including violence, poverty, and climate factors according to a Congressional report issued in January. The majority of these cases are defensive asylum claims.

Venezuela was responsible for at least 10 percent of asylum cases in 2017. It’s unclear how many defensive asylum cases originated from Venezuela in 2017 as the Department of Homeland Security only published statistics on the top 10 countries for defensive asylum applications. In fiscal year 2017, Venezuelans requested 27,634 affirmative asylum applications to the United States, a number that increased to 28,485 the next year. In 2018, between October and December, 8,184 such applications were also requested.

Asylum seekers and grants by country

The data used in this report was compiled from reports issued by USCIS, EOIR and the Department of Homeland Security.

Why do people immigrate to the US? 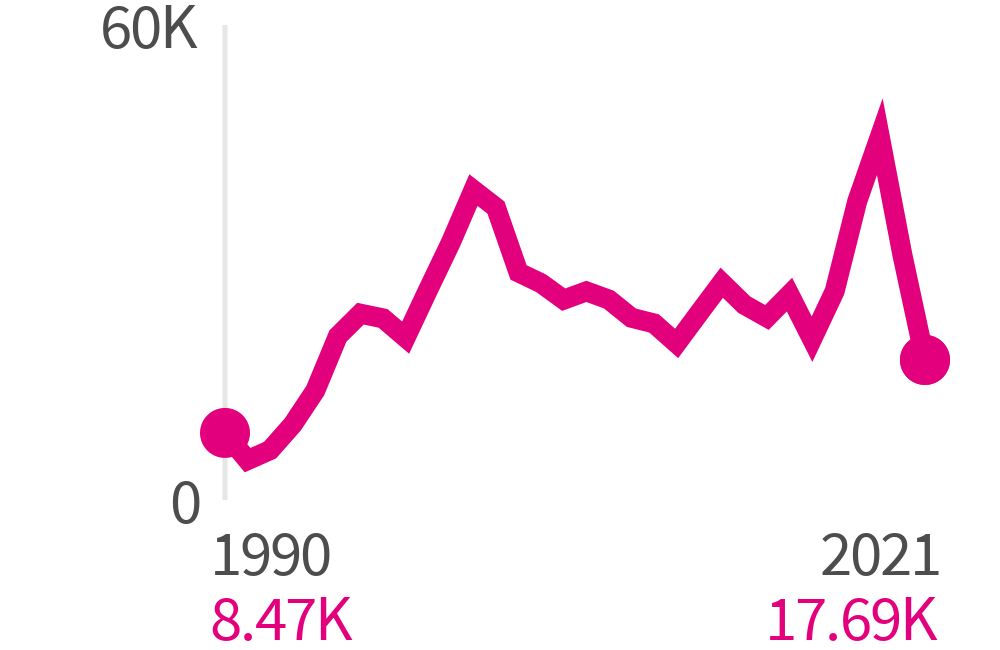