How do SNAP benefits account for inflation and a global pandemic?

10 facts about the US environment

Where are temperatures fluctuating the most from historical averages? How much money does the government earn on energy and minerals? Get the answers below.

The third-annual State of the Earth is back to help American evaluate the conditions of the nation's land, water, and air. Here are some of the top findings from the report.

1. Seventy-nine percent of US energy comes from fossil fuels. The share of energy consumption from nuclear and renewable sources has more than doubled since 1980. 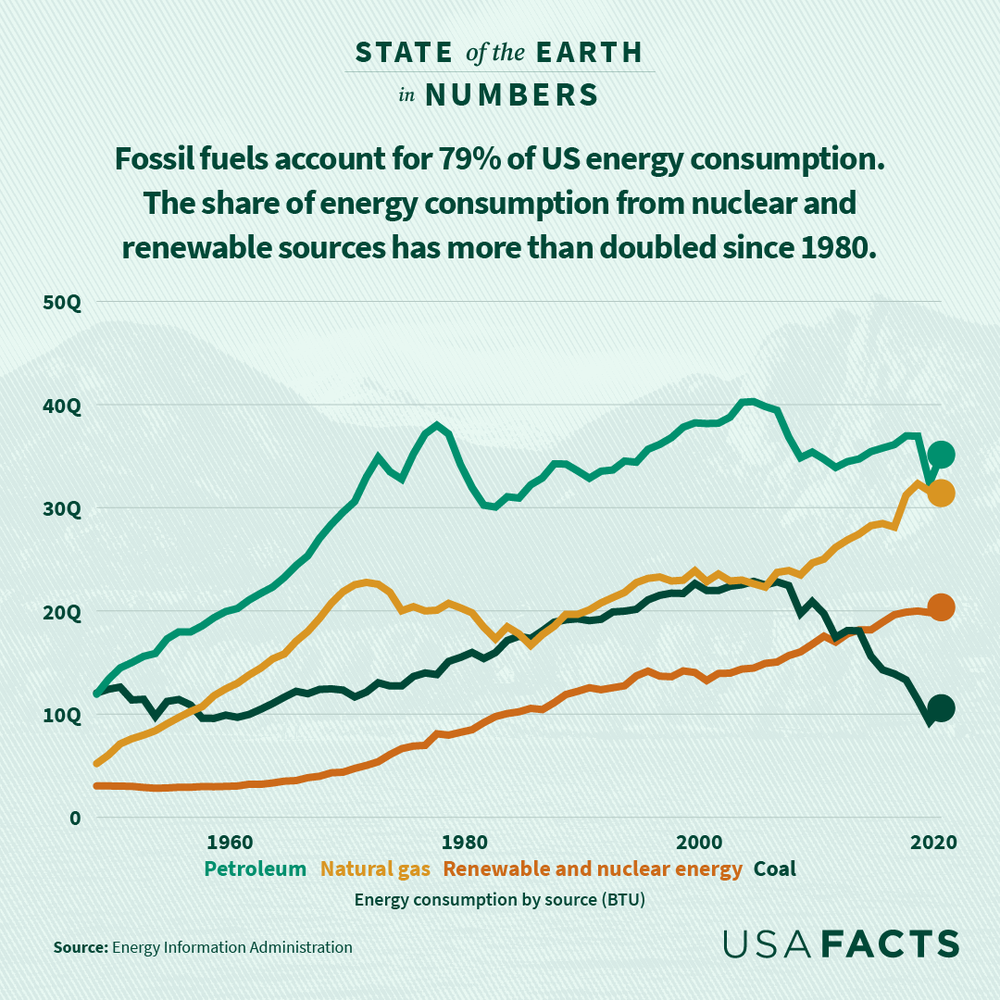 Meanwhile, the number of renewable energy jobs is growing, while fossil fuel jobs are declining.

2. In 2019, the US was fifth among the world’s 10 largest economies for its proportion of energy consumption (20%) coming from renewable and nuclear energy. 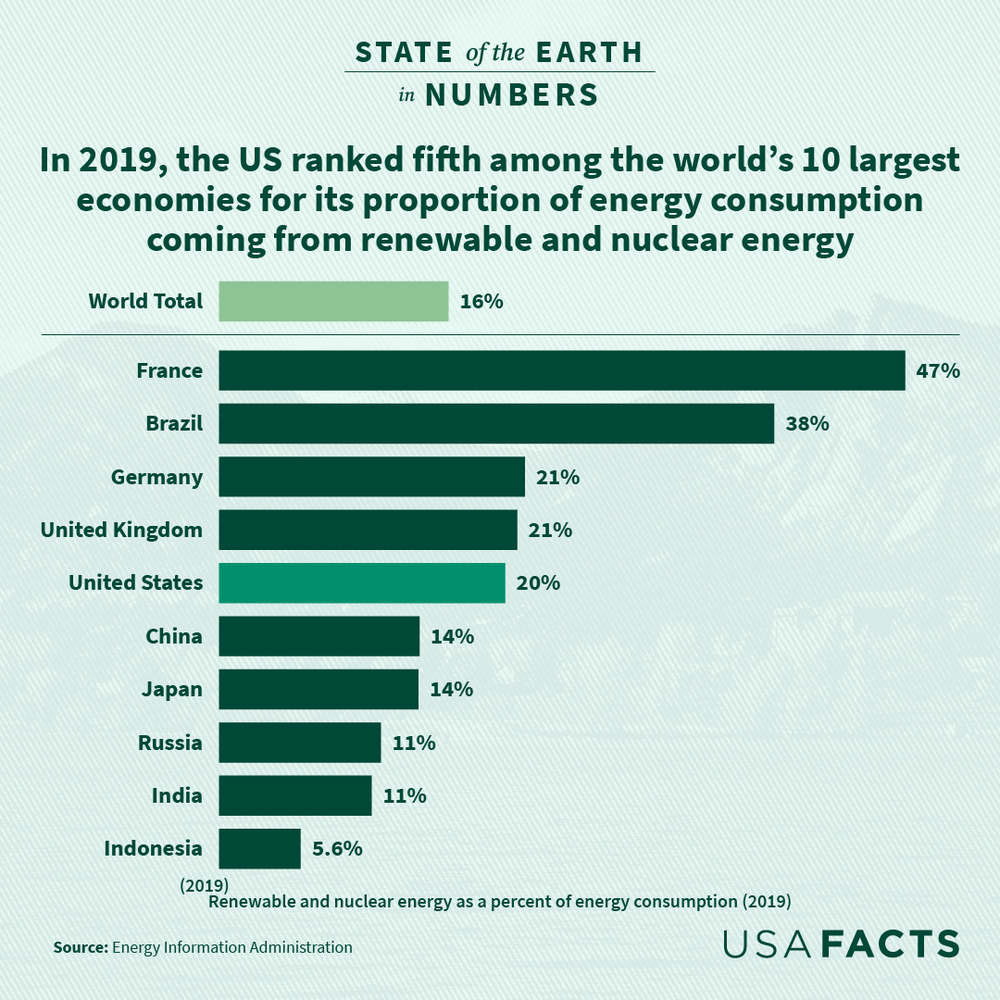 France was the top country in this category, with renewable and nuclear energy accounting for 47% of its energy consumption. These sources were more than half of the energy consumed by 11 countries, including Bhutan (84%), Iceland (79%), and Paraguay (74%), but they do not rank among the world’s 10 largest economies.

3. Transportation was the largest source of US emissions for 2020. It surpassed electricity generation emissions in 2017. 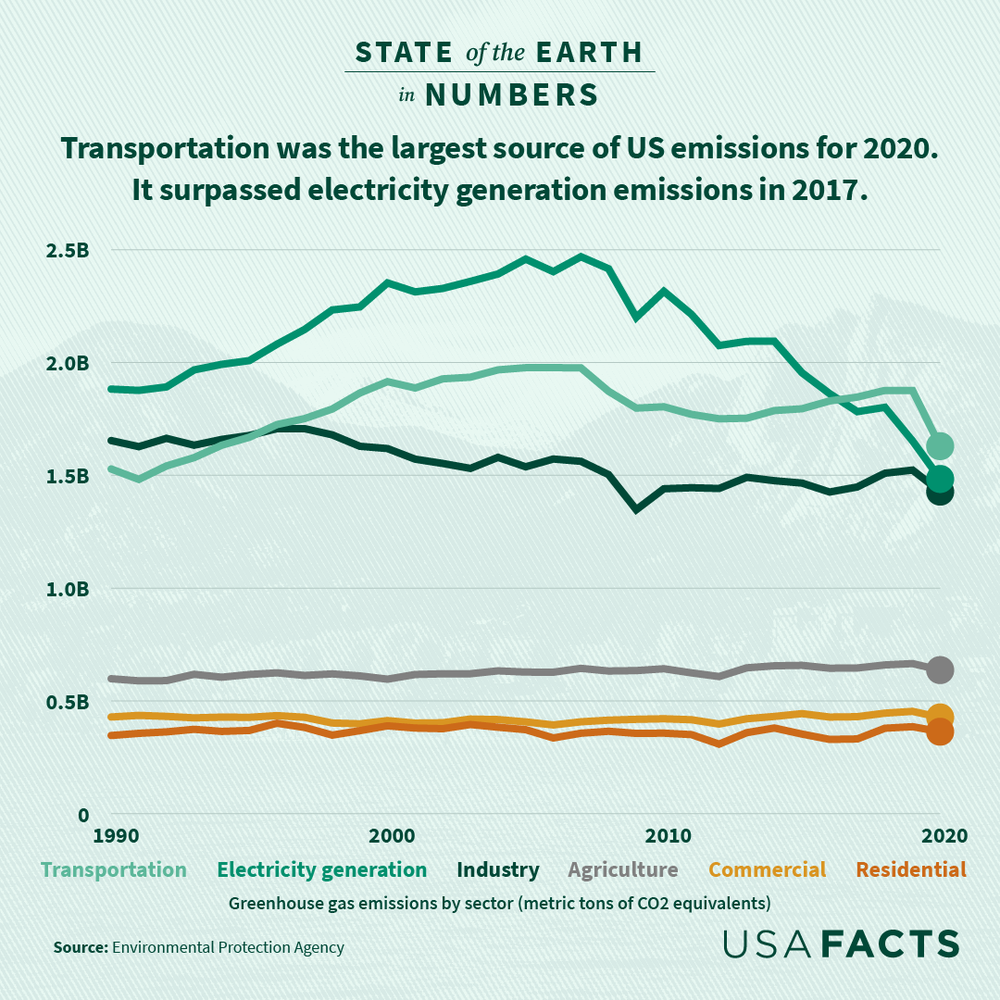 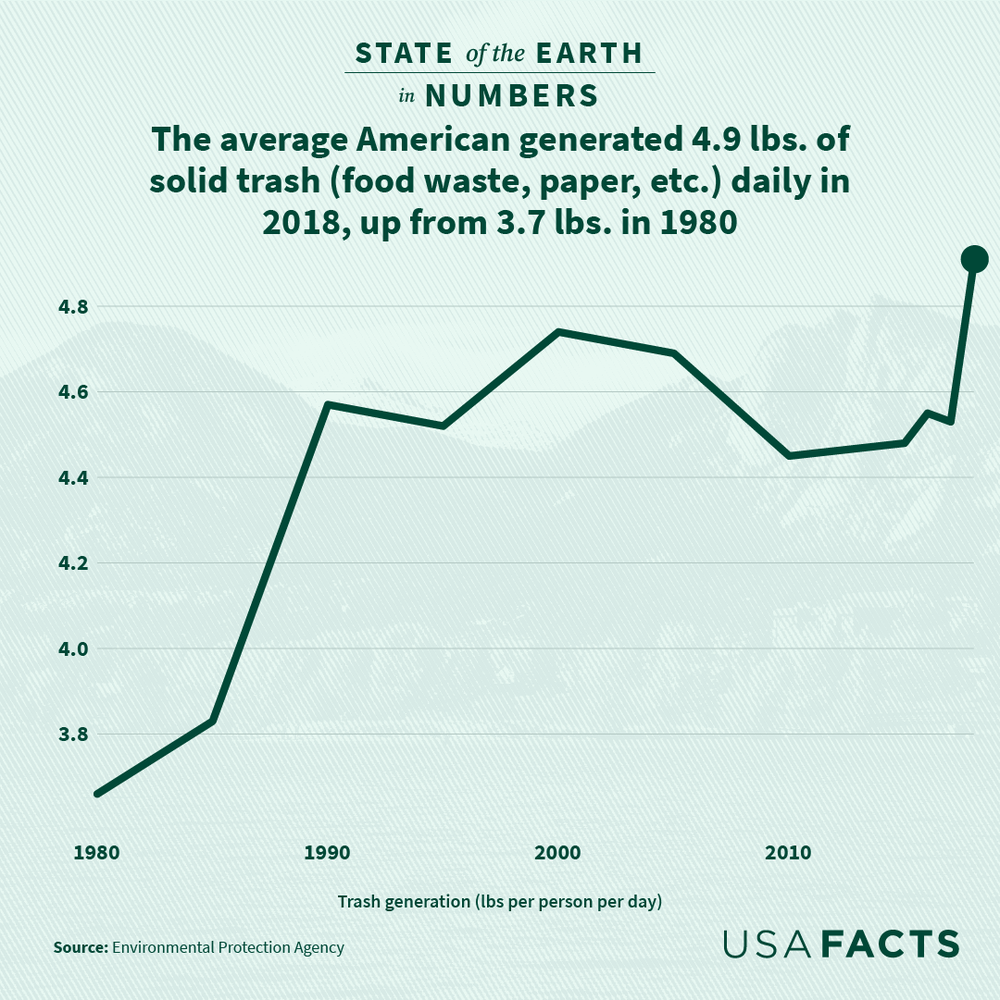 5. Last year, all states, particularly in the Northeast and upper Midwest, were warmer than the 20th-century average. 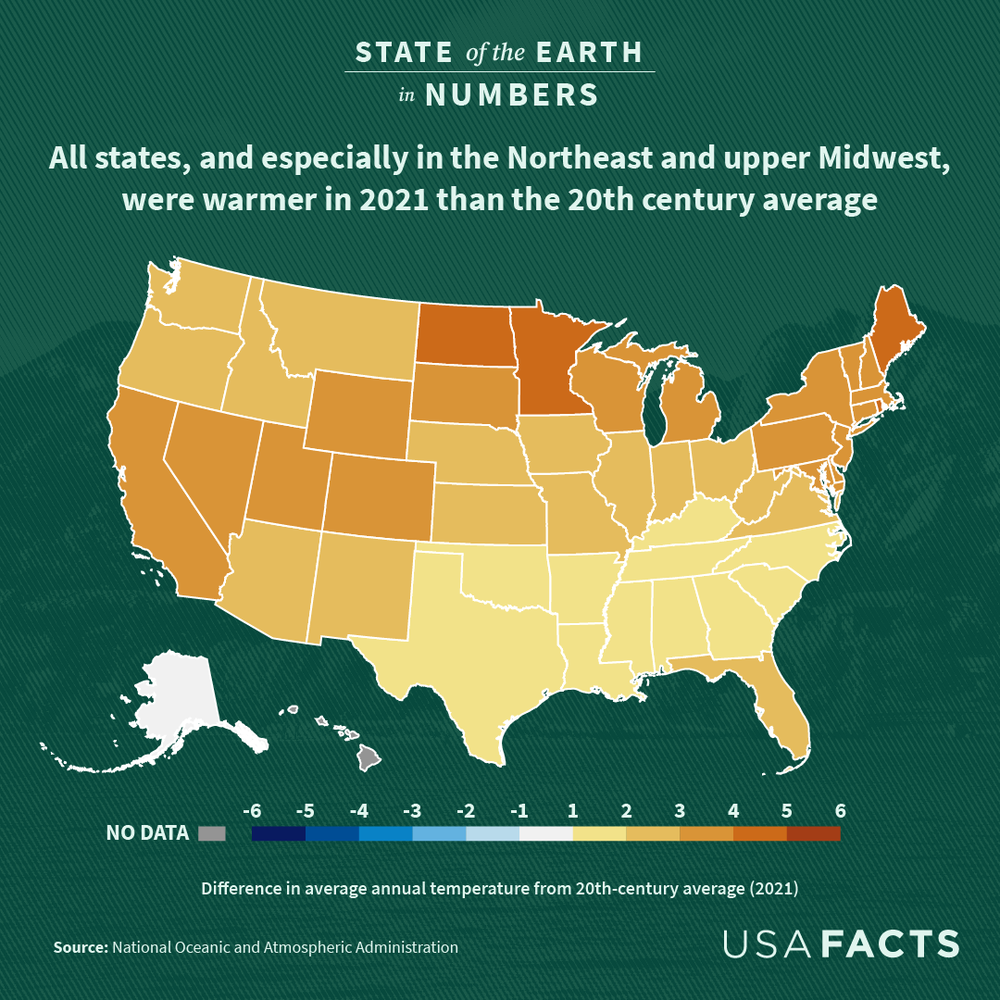 Minnesota had the biggest difference: its average annual temperature was 4.2 F° above its 20th-century average. Maine and North Dakota’s averages were 4.1 F° higher. (Data for Hawaii was unavailable.)

On a state level, Mississippi and Massachusetts had 10+ inches of precipitation above their 20th-century averages. Meanwhile, Montana and Oregon had the largest drops in average annual precipitation. 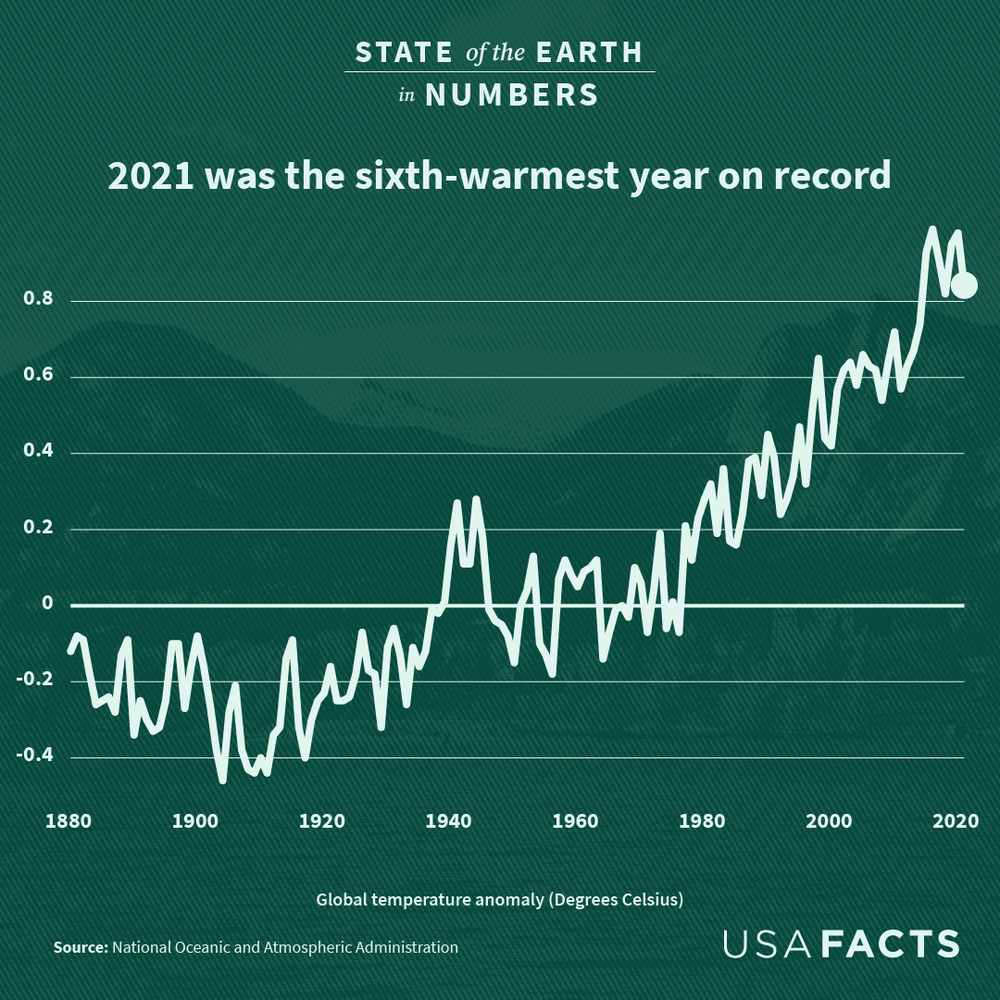 The average global temperature was 1.51 °F above the 20th-century average, according to the National Oceanic and Atmospheric Administration (NOAA). And while last year was colder than 2016 — the hottest year on record — it was warmer than any recorded year before 2015.

8. From new laws to executive orders and presidential memoranda to executive agency rules, there were 81 federal actions on land, energy, and the environment in 2021. 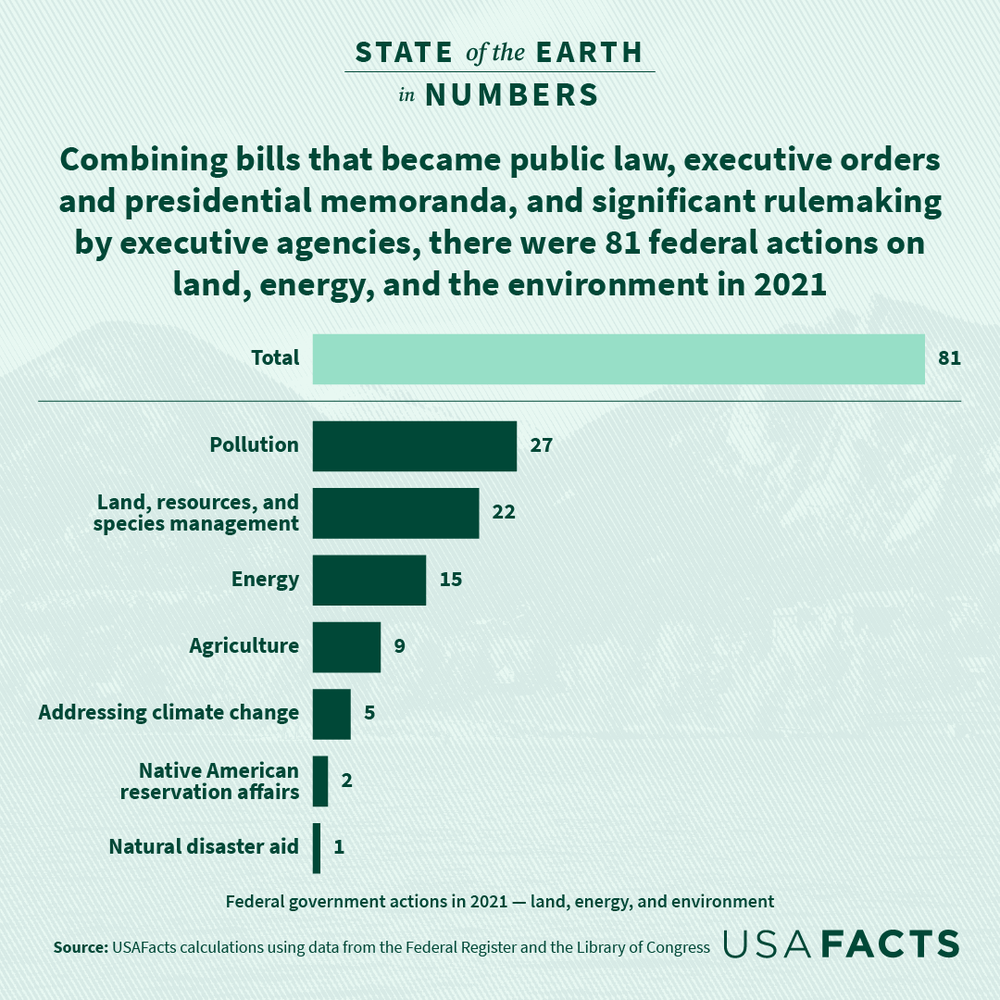 One law nullified a 2020 EPA rule that removed some emissions regulations on the oil and natural gas sector. Fourteen actions regulated the use of hazardous materials, while 15 established rules on how humans interact with animals. ​

9. The federal government spent $40.9 billion in 2020, or 0.6% of all federal expenditures, on the environment and natural resources (not including spending on renewable energy).

10. The federal government collected $11.3 billion in revenue from energy and minerals extracted from its lands and waters in fiscal year 2021, a 19% drop from 2011 (adjusting for inflation). 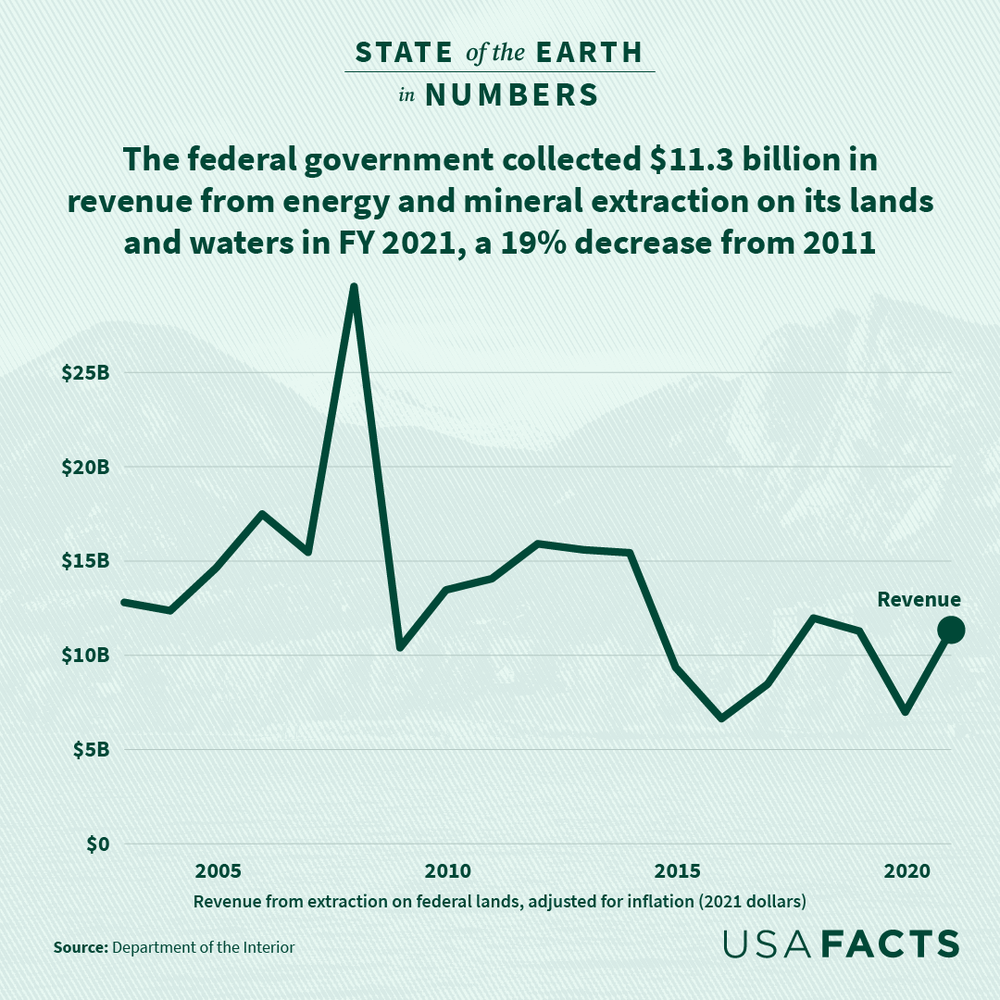 See more environmental metrics from the government in the State of the Earth report and USAFacts' environment articles.

How US forests affect the environment and help stabilize the climate

How many wildfires occur in the US?

Americans now use more energy from renewable sources than from coal