Unemployment rates more than double in nearly every state in April

Share On
=
Government structure > Item 1 - Purpose and Function of Our Government - General > PART I > Government 10-K
A letter to our readers
A letter to our country’s shareholders Government data is out of date. Healthcare cost increases put pressure on government spending as well as insurance and out of pocket costs for companies and individuals. Americans are saving more. Fewer families own homes and it’s harder to get into housing. Between 2007 to 2017, government spending on nutritional assistance grew faster than the increase of people in poverty. College is getting more expensive. State and local governments raise billions in revenue from investments. A smaller percentage of the population worked in 2017 than before the Great Recession. Looking forward

The US is a constitutional republic and representative democracy. Our Government is regulated by a system of checks and balances defined by the US Constitution, which serves as the country’s supreme legal document. In the US, citizens are usually subject to three levels of government: federal, state, and local. The original text of the Constitution establishes the structure and responsibilities of the federal government and its relationship with the individual states. The Constitution has been amended 27 times, including the first 10 amendments, the Bill of Rights, which forms the central basis of Americans’ individual rights.

Each branch of government can change acts of the other branches as follows:

The legislative branch enacts legislation, confirms or rejects presidential appointments, and has the authority to declare war. This branch comprises Congress (the Senate and House of Representatives) and several agencies that provide support services to Congress.

The executive branch carries out and enforces laws. It includes the president, vice president, the Cabinet, 15 executive departments, independent agencies, and other boards, commissions, and committees.

For a discussion of each of the federal government departments and offices, please see The United States Government Manual at https://www.govinfo.gov/app/collection/GOVMAN.

All 50 states have legislatures made up of elected representatives, who consider matters brought forth by the governor or introduced by its members to create legislation that becomes law. The legislature also approves a state’s budget and initiates tax legislation and articles of impeachment. The latter is part of a system of checks and balances among the three branches of government that mirrors the federal system and prevents any branch from abusing its power.

Every state except one has a bicameral legislature made up of two chambers: a smaller upper house and a larger lower house. Together the two chambers make state laws and fulfill other governing responsibilities. The smaller upper chamber is always called the Senate, and its members generally serve longer terms, usually four years. The larger lower chamber is most often called the House of Representatives, but some states call it the Assembly or the House of Delegates. Its members usually serve shorter terms, often two years. Nebraska is the lone state that has just one chamber in its legislature.

Most states have a supreme court that hears appeals from lower-level state courts. Court structures and judicial appointments/elections are determined either by legislation or by the state constitution. The state supreme court usually focuses on correcting errors made in lower courts and therefore holds no trials. Rulings made in state supreme courts are normally binding; however, when questions are raised regarding consistency with the US Constitution, matters may be appealed directly to the United States Supreme Court. 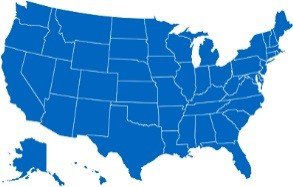 A government is an organized entity that, in addition to having governmental character, has sufficient discretion in the management of its own affairs to distinguish it as separate from the administrative structure of any other governmental unit.

To be counted as a government, any entity must possess all three of the following attributes:

The US has many insular areas, or jurisdictions that are neither a state nor a federal district, including any commonwealth, freely associated state, possession, or territory. Five of the insular areas – Puerto Rico, Guam, Northern Mariana Islands, US Virgin Islands, and American Samoa – are self-governing, each with a non-voting member of the House of Representatives and permanent populations. The remaining areas are small islands, atolls, and reefs in the Pacific Ocean and Caribbean Sea. US possession of certain of these areas is disputed by other countries. The population of these areas are excluded from our reported population figures. However, these individuals may contribute to the revenues, expenditures, and other figures included in this report.

Our Government officially recognizes 573 Indian tribes in the contiguous 48 states and Alaska. The US observes tribal sovereignty of the American Indian nations to a limited degree, as it does with the states’ sovereignty. American Indians are US citizens and tribal lands are subject to the jurisdiction of the US Congress and the federal courts. Like the states, the tribal governments have a great deal of autonomy with respect to their members, including the power to tax, govern, and try them in court, but also like the states, tribes are not allowed to make war, engage in their own foreign relations, or print and issue currency.

A letter to our country’s shareholders
Government data is out of date.
Healthcare cost increases put pressure on government spending as well as insurance and out of pocket costs for companies and individuals.
Americans are saving more.
Fewer families own homes and it’s harder to get into housing.
Between 2007 to 2017, government spending on nutritional assistance grew faster than the increase of people in poverty.
College is getting more expensive.
State and local governments raise billions in revenue from investments.
A smaller percentage of the population worked in 2017 than before the Great Recession.
Looking forward

Item 7. Management’s Discussion and Analysis of Financial Condition and Results of Operations

Item 7A. Quantitative and Qualitative Disclosures about Market Risk

Item 9A. Controls and Procedures